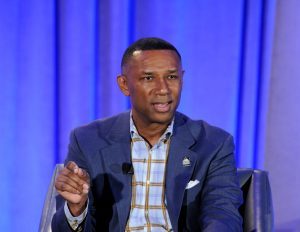 Taylor recently appeared at the Black Enterprise Entrepreneurs Summit in Houston alongside Chairman and CEO of Koch Industries Charles Koch, who donated $25.6 million to TMCF. During the Black Enterprise Small Business Awards luncheon at the summit, the two men spoke about cultivating the next generation of entrepreneurial innovators. Their talk was moderated by Black Enterprise Senior Vice President and Executive Editor-at-Large Alfred Edmond.

Taylor was also in the news earlier this year because of his courting of the Trump administration and arranging of a meeting between Trump and heads of HBCUs, a meeting roundly dismissed by some as a photo op. Although many denounced Trump’s released budget blueprint in March, TMCF did not.

Here is an article from HBCU Digest that examines Taylor’s outstanding work at TMCF and his upcoming departure. It also looks honestly at the difficulties involved in working within the HBCU sector.

Seven years and hundreds of millions of dollars raised since arriving in Washington, D.C., to head the Thurgood Marshall College Fund, and now Johnny Taylor will leave the HBCU advocacy nonprofit for a new gig: head of the Society for Human Resource Management.

The timing of the departure and the nature of the work may seem a little off for Taylor, but a closer look at the details reveals exactly why it appears to be a great fit for him. With extensive experience as general counsel and head of human resources at a variety of nonprofits and privately held companies, it is not a position which requires him to face-plant before he can gather his footing to start sprinting towards profit and positioning.

And that the last president to lead the organization earned $1.5 million annually doesn’t seem to hurt either.

But the real question is why would a guy who’s courted the attention of suits from iconic brands in sports, technology, and entertainment leave a job that puts his name as a sector leader? In the last three years, Taylor has made headlines in attracting more than $60 million in support of 47 public HBCUs from Apple and the Koch Foundation.

Money and fewer political headaches is the seemingly easy answer. But if he feels like many in the community feel, fatigue is the real culprit. Working with HBCUs is mentally and physically draining because our schools miss so many opportunities to fill in gaps of missing resources with initiative and creativity.

And yet, we ask people like Taylor to keep fighting and selling HBCUs to legislative and corporate communities growing more skeptical with the pending collapse of the HBCU ecosystem.

At institutional levels, the math just seems to be getting worse for HBCUs. We believe in them because there are millions of stories of how these schools change or even save the lives of students. We know that because of Taylor’s work in engaging Gallup to actually survey HBCU alumni to find out just how valuable we find the HBCU experience to be in our personal and professional lives.

But where is the promotion of our research? Where are the annual economic impact studies produced by each school? How can external advocates like Taylor be expected to improve the quality of life at HBCUs, when HBCUs themselves struggle to produce evidence of institutional life itself?

Turnover is rampant, political influence high, and morale low at too many of our schools; not because the HBCU mission is irrelevant or obsolete, but because we have not adapted its value to modern metrics of success.

And until we do that, the quiet crisis of a talent deficit at our schools will become their loudest threat. And Taylor, one of the biggest riflemen we had in the war, has taken a well-earned and honorable discharge.

This article was written by J.L. Carter Sr. and originally published on HBCU Digest.