6 Fixes That Could Have Made 'UnderCovers' A Hit 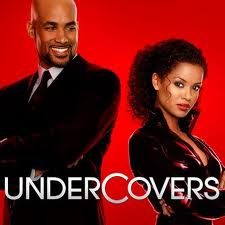 UnderCovers, starring Boris Kodjoe and Gugu Mbatha-Raw, should have been a hit. It still can be.

After airing just seven episodes, NBC announced last Thursday that it’s pulling the plug on UnderCovers, the series starring Boris Kodjoe and Gugu Mbatha-Raw as husband-and-wife spy team/restaurant owners Stephen and Samantha Bloom, pulled out of retirement by the CIA for special missions. This is a big disappointment for African American television viewers who had high hopes for the first hour-long series to star black actors in lead roles. Indeed, had UnderCovers been a hit, it could have opened the doors for more lead television roles for black actors.

NBC certainly did its part to lay the groundwork for the show to succeed, soliciting the support of black community influencers via previews and actor appearances at events such as the 2010 convention of the National Association of Black Journalists and the Black Enterprise Golf & Tennis Challenge. It also marshaled an aggressive social media campaign for UnderCovers on Twitter and Facebook, with Kodjoe doing a yeoman’s job of tweeting to fans of the show. (Follow Boris Kodjoe on Twitter.) Plus, the show had two attractive and likable stars in the lead roles. (Kodjoe has a huge and loyal female fan base; Mbatha-Raw is a talented actress and arguably one of the most beautiful women on television.) So why did it fail?

The truth is (and it kills me to say this), UnderCovers just isn’t very good. In fact, I couldn’t bear to watch a full episode of the series since the second episode, where the sad running “joke” was that world-class spy Stephen Bloom couldn’t work the coffee machine. (Why would he even care to try?) It’s not that the show doesn’t have its fans, judging from the outcry I hear–from people I knowÂ personally as well as those I’m connected with via social media–thatÂ the showÂ isÂ not getting a fair chance to succeed. However, the ratingsÂ indicate that UnderCovers‘ loyalists are being outvoted. After starting with a high of nearly 8.6 million viewersÂ withÂ the pilot episode,Â viewershipÂ fell to a low of 5.45 millionÂ byÂ the sixth episode. UnderCovers hasn’t pulled more than 6 million viewers since the third episode.

I was one of the attendees at the NABJ convention in San Diego in the audience for a special preview of the first episode of UnderCovers. The fatal flaws I saw in the show then were only confirmed as I tried to commit to watching it as