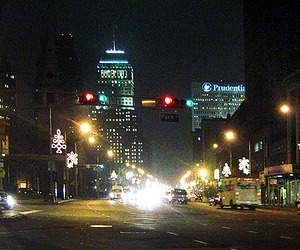 A few months ago, New Jersey native Richard Florida, author of “The Rise of the Creative Class,â€ came back home to Newark. He spoke to several community and business leaders about what it would take to ignite Newark’s creative class even more. Newark’s downtown section is definitely a special place and those who think differently are stuck in 1967.

The arts and entertainment sector in downtown Newark has taken off with tons of activity from television and film studios. Major music acts like The Rolling Stones, Taylor Swift and more are choosing to perform at the Prudential Center instead of the nearby New York City options. Businesses are growing in number, and Panasonic is now building a brand new skyscraper for their headquarters. There is much more going on than can be named in the city, but I want to focus on the reasons entrepreneurs should pay attention.

Business development and partnership opportunities in your backyard. Newark, NJ is home to over fifty Fortune 500 companies. Most of these companies are eager and excited to work with young startups and help out the local entrepreneur eco- system.

Transportation hub and proximity to NYC. Newark is the region’s leading transportation hub and just 15 minutes outside of NYC by NJ Transit or the Path Train. One of the many advantages of working in downtown Newark is actually being able to take advantage of the perks of NYC, but not having to deal with the price of being based there.

Cheaper. 22 million square feet of available office space at less than half the average rent in Manhattan. In addition, downtown Newark has the NJIT Enterprise DevelopmentÂ  Center which houses over 80 tech and life-science companies. There are also several collaborativeÂ workÂ space projects underway.

Over 44,000 college students. Rutgers University, Rutgers University Business School, New Jersey Institute of Technology and many more schools are based in downtown Newark. Many students in the area are bit by the entrepreneur bug and looking to create their own startups. This could be a great pool ofÂ  smart, skilled young people to recruit from as well.

Growing tech scene. New Jersey’s largest city has no excuse not to have a tech scene brewing. NJIT’s Economic Development Committee and local meet-up groups engage with over 400 greater Newark area entrepreneurs monthly. Lean Startup Machine and many other hackathons are making their way to Newark because of the opportunity that exists. This gives entrepreneurs the ability to be on the ground floor of a new movement.

The mayor is a recent startup founder. Cory Booker founded Waywire this year. Who better to understand the new challenges tech entrepreneurs face than someone like Cory Booker? It’s a great asset to have a mayor who understands how important resources and culture is to help grow Newark to its potential.

IÂ didn’tÂ list everythingÂ that’sÂ special about Newark, but my point was to make the city part of the conversation. If this sounds interesting to you, you should really visit the city, and see for yourself. Newark is a true east coast sleeping giant.