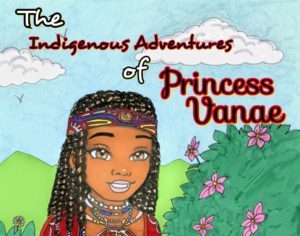 Coloring is often seen as a fun, creative pastime for children or an activity of leisure for grown folks who need a mental break from adulting. But, the purpose of coloring doesn’t end there. One little girl is using the recreation as a tool of empowerment and education around black and indigenous history.

Last month, 6-year-old girl Vanae James-Bey and her mother, Veronica Bey, released a coloring book titled The Indigenous Adventures of Princess Vanae, which explores the history and culture of black indigenous people in Africa and the Americas. Geared toward children ages 5 to 13, the coloring book is currently being sold for $12.95 at www.PrincessVanae.com. Since its release, Bey says it has been purchased and praised around the world.

Bey says that the idea for the book stemmed from her desire to teach her daughter about the depths of their identity and ancestry. “Our family has indigenous American roots that we are in touch with and it’s always been important for them to know and understand that,”Â said the mother.Â However, Bey said she found it very difficult to find lessons plans on the topic.

“Culture is very important to our family,â€ she said. “Being home-schooled, we tend to stick to a more Afrocentric curriculum and noticed how hard it was to find specific materials for lessons and how many other parents [and] students must feel the same.”

Bey added that it was also very important for her to expose her daughter to the history of black and indigenous [cultures] that expand beyond American slavery and genocide.

“We have friends whose children go to public schools and are taught that Native Americans are extinct or are only taught about slavery as black history, I didn’t want that to be my children’s introduction to their history.”

Next up, the mother-and-daughter duo plan to create more stories that teach about black people from other cultures.

“We plan on making more volumes because we couldn’t fit all cultures into one,â€ Bey said. “Fiction books [are also on the way]. Wherever black people are in the word as a distinct culture, we plan to explore them all.â€