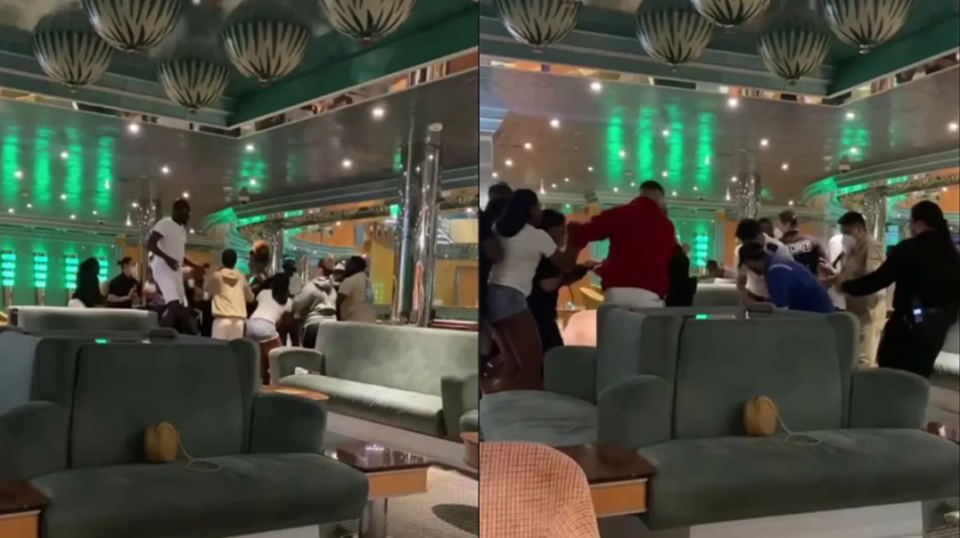 Theresa James, a travel agent and passenger on the cruise ship, witnessed the brawl from her door. She says it started just before 2 a.m. on the ship’s fifth floor, where the dance club and casino are located.

The ruckus lasted for about an hour and spilled down to the first floor where security personnel was outnumbered by the estimated 60 people said to be involved. James thanks Carnival security for working to end the madness.

She described the culprits as “ignorant fools acting stupid” on the last day of a vacation. One witness, tweeting under the handle @nyeem0, recalled being “at the bar listening to my own music sipping a Shirley Temple, then the brawl broke out of nowhere!”

He claimed some of the passengers were left “injured and cut up from glass” and most of the ship’s security was called to restore order.

“It was the last night so i guess they wanted to go out with a bang, but a lifetime ban from cruising is wild lol.” the witness added.

Police are investigating those involved in the fight that got so bad the Coast Guard had to be called to help escort the ship to shore, NBC NY reports.

The Carnival Magic was arriving back to its New York City-New Jersey hub following an eight-day excursion that included stops in Dominicana, Turks and Caicos, and a private island in the Bahamas.

Officers with the NYPD waited as the ship docked Tuesday morning. Carnival said the ship arrived in Manhattan as scheduled.

It’s unclear if anyone was arrested or if New York or New Jersey authorities are unable to take action due to the brawl taking place over international waters.