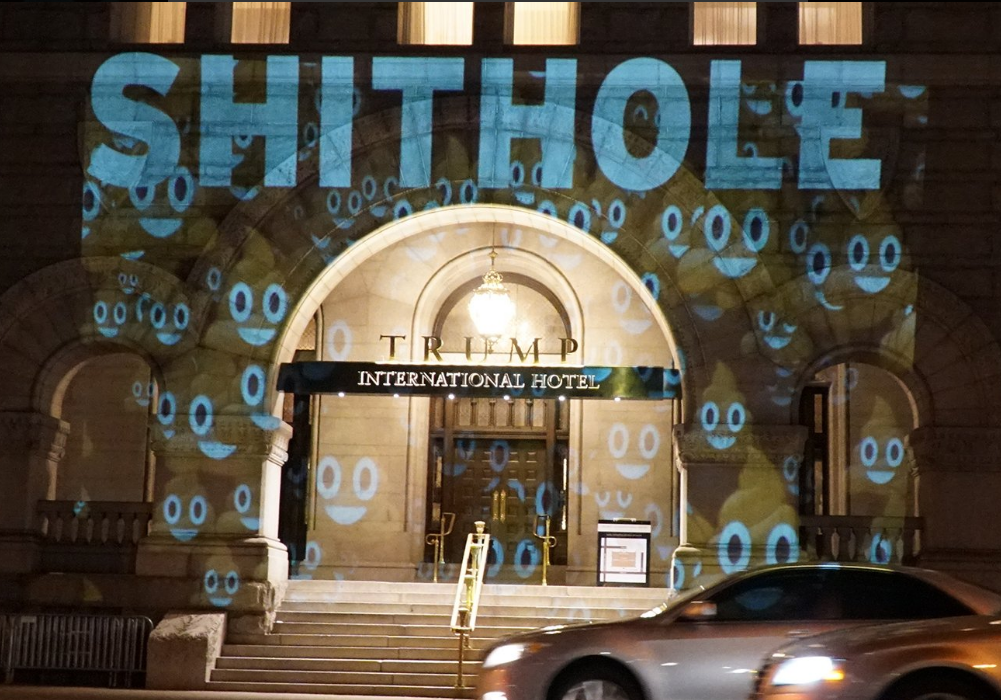 The nation is still seething over President Donald Trump’s reported inflammatory remarks about countries populated by black and brown people. During a private meeting at the Oval Office last week, lawmakers say the president questioned why the U.S. would provide protections for immigrants from Haiti, El Salvador, and African nations, which he described as “s–thole countries.” Rather, he suggested that the U.S. should accept immigrants coming from places like Norway. He also argued that Haitians should be excluded from an immigration bill, asking, “Why do we want people from Haiti here?”

After being accused of blatant racism, the president responded to public backlash Sunday by declaring himself “the least racist person.” Still, that has not stopped critics from sounding off, while others have demonstrated contempt for Trump’s bigotry in a variety of creative and meaningful ways.

Here’s a list of the seven most epic responses to Trump’s latest racist rhetoric.

Alisha Laventure, a news anchor for ABC affiliate WFAA in Dallas, delivered a powerful rebuttal to the president on Friday. After reporting on a Dallas pastor who defended Trump’s comments, Laventure revealed that she is the daughter of Haitian immigrants who worked extremely hard to build a life in America. In the clip, she asks how the president could “criticize people who are simply trying to come to this country to live a better life?”

Moments later, she tore into Trump. “Enough is enough! If the head of any corporation said what the president said yesterday, that person would be fired,” she said. “Why should we accept any less from the president of the United States of America? A country, by the way, that’s played a hand in the poverty Haiti and other nations face today.” Not only were the president’s remarks wrong and hurtful, “to be blunt—it was racist,” Laventure exclaimed.

Laventure shared her response in a video on Facebook that has since gone viral.

2. Conan to Tape a Show in Haiti

Conan O’Brien is hitting back at President Trump’s derogatory remarks about Haitians by filming a show in Haiti later this week. The late-night talk show host announced that he will tape a special episode titled “Conan Without Borders,” in which he will likely make a mockery of Trump.

“I have no idea what the president has against the people of Haiti, but if the president doesn’t like them, then they must be lovely people,” he said on his television show Monday. He also tweeted his excitement about his upcoming trip to the Caribbean nation.

For about 40 minutes on Saturday, the term “s–thole” was projected onto the entrance of the Trump International Hotel in Washington, D.C. That was followed by a message that read, “Not a D.C. resident? Need a place to stay? Try our s–thole,” along with poop emojis.

Robin Bell, a protest artist and award-winning video journalist based in Washington, said he orchestrated the stunt as an expression of his First Amendment rights. “By being silent we are being complacent and it’s really important because if we all did something when we see something maybe bad things wouldn’t happen as much,” he said, according to Teen Vogue.

In response to Trump’s reported disparaging comments, Airbnb launched a $100,000 digital campaign advertising listings in Haiti, El Salvador, and African countries. The vacation-rental company also revealed that the 75,000 hosts in those locales earned $170 million in 2017, during an expansion push there. The company says that it hopes the ads will encourage tourism and “more travelers to visit these special and beautiful places,” as part of “our mission to create a world where anyone can belong anywhere,” reports Fortune. Airbnb CEO Brian Chesky also tweeted several Airbnb destinations, including sites in Kenya and Ghana.

5. Trevor Noah Deadpans: “As someone from South S–thole, I’m offended”

Late-night talk show host Trevor Noah used Trump’s vulgar comments about immigrants as fodder during Thursday’s episode of The Daily Show with Trevor Noah. The South African comedian said: “Guys, I don’t know how to break this to you, but I think the president might be racist,” adding, “As someone from South S–thole, I’m offended.”

An Italian Baltimore restaurant reprinted its menu to rebut Trump’s reported comments: “The U.S. once considered Italian immigrants to be from a s–thole country. Glad that’s changed, or we’d live in a culinary wasteland of well-done steak & ketchup,” read the menu at Hersh’s in Baltimore’s Riverside neighborhood.

The African Union (AU), a continental group that represents all 55 countries in Africa, along with African ambassadors to the United Nations sharply denounced Trump’s language and called on him to apologize. “The African Union Mission wishes to express its infuriation, disappointment and outrage over the unfortunate comment made by Mr. Donald Trump, President of the United States of America, which remarks dishonor the celebrated American creed and respect for diversity and human dignity,” the African Union mission to the United States said in a statement Friday, according to CNN.

The AU went on to demand “a retraction of the comment as well as an apology, not only to the Africans, but to all people of African descent around the globe.” Meanwhile, African UN envoys issued a statement saying their group is “extremely appalled at, and strongly condemns the outrageous, racist and xenophobic remarks attributed to the President of the United States of America.”