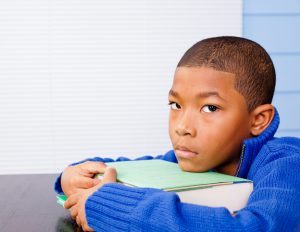 A March issue of Crain’s Detroit Business tells a tragic but ultimately optimistic story about a 6-foot, 6-inch high school senior, a burly 17-year-old who until recently could not read.

The article says Elijah Craft is dyslexic, but after working with a tutor through the nonprofit Beyond Basics, the young man has improved tremendously.

Craft may have a future because of the intervention of that nonprofit. But the larger issue is that many of Detroit’s schoolchildren–and many black schoolchildren throughout the nation–cannot read. And not all are dyslexic.

Thirty-six million adults in the U.S. have what are considered “lowâ€ literacy skills; more than half of them are black or Hispanic.

The Brookings Institute has highlighted seven areas of racial disparity in education that negatively affect the vast majority of black American children:

Here’s an excerpt from the Brookings article below.

School readiness gaps are improving, except for black kids

As Richard Reeves details, a 2015 paper by Sean Reardon and Ximena Portilla demonstrates that inequality in school readiness–in terms of math, reading, and behavior–declined quite significantly between 1998 and 2010, but that progress in terms of closing race gaps was uneven. While Hispanic-white differentials in school readiness have narrowed, the black-white gap has shown much less movement, and that movement is not statistically distinguishable from zero.

Misbehavior in school can pay off for white, but not black students

On the Chalkboard, Nicholas Papageorge summarizes his research that finds some non-cognitive skills that manifest as childhood misbehavior in the classroom, such as aggression, are also predictive of higher earnings later in life. He finds, however, that this benefit is limited to children who do not come from low-income families. And preliminary evidence shows that for the same levels of externalizing behaviors, African American children face higher earnings penalties than white children.

Read more at the Brookings Institute.