8 Signs That Youâ€™re Up for A Promotion 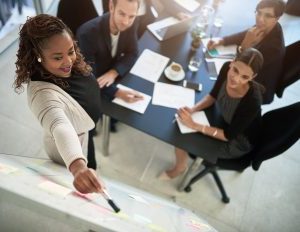 Recently, we covered those sometimes hard-to-tell signs that you’re well on your way to being fired. Those, however, aren’t the only signs we need to be on the lookout for, while at work. On the contrary, there are also signs–some more apparent than others–that you’re headed for a promotion.

Below, we share what you need to watch for to know that it’s almost to pack up your cube and head toward the corner office.

If all of a sudden you look around and notice that your plate is filling up with new tasks, it’s probably because your boss wants to see what you can handle and how you handle it. Take on new tasks with fervor like never before. This could be your deal maker or deal breaker.

When they’re asking you to join them at “the big kids table,” they’re trying to see if you can keep up and contribute. Meetings with higher-ups indicate that your presence and input are valued. Take advantage of these opportunities to let your light shine.

If you’re ever invited to lead or participate in a project that is ongoing, this is an indication that your company sees you as a strong contributor that is capable of Â providing value now, as well as in the future. If you’re brought on as a project lead, your responsibility is to knock it out of the park. If you’re a team member on a large, ongoing project, here is your chance to offer invaluable, notable input that will make the project even better.

If it seems like everything you’ve been doing lately is being noticed, it’s likely because you’re on management’s radar. Seize this opportunity to show out. They’re watching you, so give them something worth looking at.

5. Your Boss Is Promoted

When your immediate boss is promoted, there is a remaining void that must be filled. You could be that filler. If you’re lucky enough to be privy to information that your boss will be moving forward before it officially occurs, this is your time to request more responsibility and prove that you have what it takes to fill their shoes.

6. You’re Asked to Train a Subordinate

Managers want to know that the responsibilities you handle now will still be taken care of when you move on to the next level. Â Train your subordinate to do your job even better than you did. You’ll already begin earning points for overseeing a solid team.

Never underestimate how far likability can take you. If your managers enjoy having you around, they’ll not only keep you around, but they’ll want you working even more closely with them. Don’t hesitate to turn up the charm.

If you’re constantly congratulated for the work you’re doing by those in and outside of your department, it’s because your work is resonating. Keeping up that good work places you at the top of the list, when promotions and raises are being handed out. Continue being as great as you are.

If all or a few of these signs are happening to you, it may be time to pack up that brown box. Be prepared, just in case.