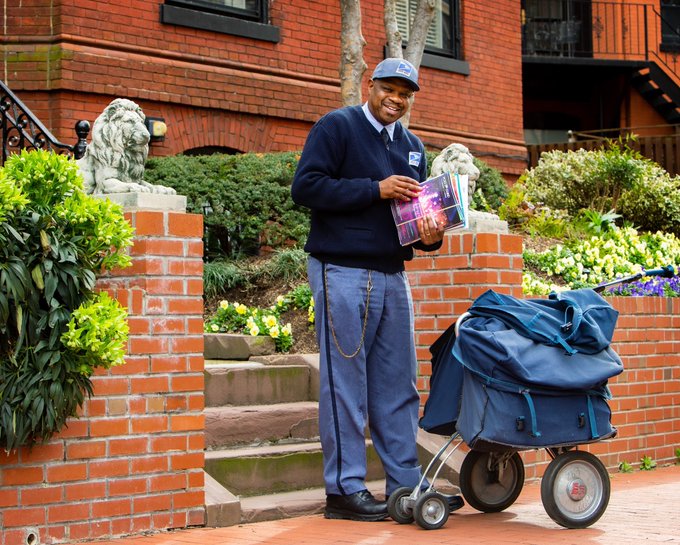 A USPS mail carrier smiles while on his route. Photo courtesy of Twitter

In a letter sent to Speaker of the House Nancy Pelosi and Minority Leader Kevin McCarthy, the group is requesting “the strongest possible relief for the United States Postal Service in the next round of COVID-19 relief legislation.”

“We write to request that any future relief package provide strong financial assistance to the United States Postal Service (USPS) while also enacting reforms necessary for its long-term viability …” Reps. Adams and DeFazio wrote. “In the CARES Act, Congress sought to stabilize our nation from the consequences of the novel coronavirus. Now, as we seek to stimulate our nation, we must take decisive steps to secure one of our country’s oldest, most cherished, and most valuable institutions.

In March, the USPS announced it will run out of money by June 1 if it does not receive funds from the government. President Trump has repeatedly called the agency “a joke” saying the agency is in bed with large tech corporations such as Amazon.

The USPS said it needs as much as $75 billion in cash, loans, and grants to continue running past June.

“Congresswoman Adams knows that the United States Postal Service provides an essential, constitutionally mandated service that is impossible to replicate or replace,” North Carolina Association of Letters Carriers Legislative Liaison Tim Rorie said in the letter. “We need the strongest possible relief for USPS and the letter carriers on the front lines of this crisis. Thank you to Rep. Adams and the 82 other members of Congress standing up to say US Mail is essential: not for sale, nor on the chopping block.”

To make matters worse, many USPS employees have been infected with the coronavirus and are demanding hazard pay as a result.

On Thursday, businessman Louis DeJoy, was picked to head the USPS. DeJoy has no experience in the USPS, but according to campaign finance data from the Federal Elections Commission, he has donated $360,000 to the president’s re-election campaign and about $70,000 to the Republican National Committee.