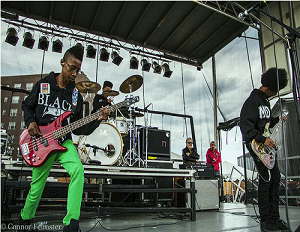 It appears that the next superstars on the metal scene will be among the youngest talent on the block.

Coming together to form the band, Unlocking the Truth, the young boys have been leaving their mark on the music scene for a few years now after being discovered in Washington Square Park in 2012 by Steve Jordan, who’s the drummer for musician Eric Clapton. Since then, the middle school superstars have performed all over the country, including the Apollo Theater, Webster Hall, the main stage at Coachella, in Las Vegas as the opening act for Guns ‘N’ Roses, and eventually landing a spot on the Vans Warped Tour.

But don’t think the boys are all play and no school work, as Tabatha makes it clear that education still comes first.

“School work comes first. If their school work is not done, they don’t play,” she says.

The boys currently have a contract with Penguin Books to publish a book on their rise to success, as well as a documentary in the works on their experience as young musicians.

It’s nice to see a bit of flavor and diverse talent being added to the metal scene and hopefully Unlocking the Truth will have a lasting impact on the industry.

Check the below video of the talented young band playing on the main stage at this year’s Coachella festival.