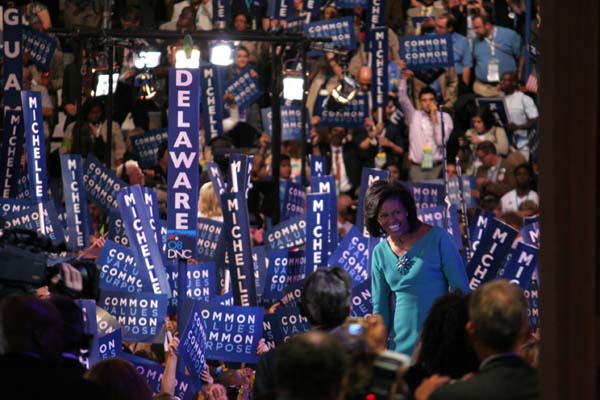 The Pepsi Center Crowd Adores Michelle Obama
Placing Michelle on the stage was a very smart strategy. It is easy to learn to love someone when you see them through the eyes of the person who loves them the most. But, when the crowd roared her Michelle and raised signs bearing her name high in the air it was easy to forget that she was not the presumptive candidate.

Michelle Obama’s speech this evening pulled the heartstrings of the crowd at the Pepsi Center proving that oration is not a gift exclusive to her husband of nineteen years. Introduced by her brother, Craig Robinson, who she described as her mentor, protector and lifelong friend, America saw a side of a middle class Michelle Obama that the “satireâ€ of Obama henchmen can not penetrate.

She drew upon the commonality of her and Barack’s experiences as it related to the experiences of working class America. “[Barack] was raised by grandparents who were working class folks… and a single mother who struggled to pay the bills, just like we did,â€ said Michelle. When was the last time that Americans could say that their president and first lady were raised in working class families?

Hers was the story of hope and a dream undeterred, even given the odds. Because despite the odds–raised by parents who had not finished college, during a time and in a city where Chicagoans living on the South Side felt the weight of the auto industry’s demise–the love and sacrifice of caring, dedicated parents was more than enough to produce a woman of unimaginable caliber.

Her speech cut to the heart of Barack’s stance on the issues (Health care, family values and job creation) without hardly addressing the issues. She spoke about her father who persevered through multiple sclerosis but continued to provide for the family, about Barack’s years setting up job training and after school programs, and about the hopes and dreams she has for her own daughters.

Her speech and the truth in the history behind it will make it very hard for pundits to accuse the Obama’s of being elitist. If nothing else, her speech proves that the American dreams of the working class masses can come true.

Marcia A. Wade is the interactive reporter at Blackenterprise.com