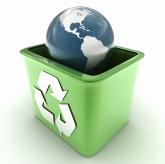 Soon after Sharon and Christopher Warner moved into their new, Washington, D.C.-area home eight years ago, they decided to do their part for conservation by using less water.

Within two weeks, they had installed water-saving toilets. But the pair quickly found that taking one step toward creating a healthy environment was a bit like eating just one potato chip–they just could not stop themselves from doing more. Soon, the home was sporting high-efficiency air filters, new ductwork, and a ventilation system that continually draws in fresh air.

“I began to buy more recycled goods and educate our three kids on ways to save the environment,â€ says Sharon, 40, practice administrator for the medical offices of her husband, Christopher, 40, an OB/GYN.

So when the Warners decided to open a second medical office to accommodate their expanding services two years ago, making it green was a “no-brainer,â€ says Sharon. Dubbed the Washington Wellness Institute, the 3,300-square-foot office is thoroughly environmentally friendly. The Warners believe its completely green interior renovation is the first of its kind in the Washington, D.C. metro area.

“We want to become the standard in environmentally responsible medical facilities,â€ Sharon says. “We want to set an example.â€

The office is situated in a high-density commercial area and is accessible by train and bus, all of which minimizes the strain on local infrastructure. It uses energy-efficient lighting and efficient appliances such as a Liebherr refrigerator and a Miele washer and dryer, all of which have the Energy Star certification. In addition, the carpet, furniture, and glass are all high in recycled content.

The office’s wood was farmed using an approach that does not deplete forests, and its paints are free of chemicals that can vaporize into the air. The Warners have applied for Leadership in Energy and Environmental Design (LEED) certification from the United States Green Building Council, which was instrumental in providing guidance for the project.

The couple’s efforts are part of what may be a growing trend in the healthcare industry. In a survey of healthcare administrators released last spring by McGraw-Hill Construction, 19% of organizations reported that they expected to be “significantly involvedâ€ with green building in 2008. That percentage marked a threefold increase from the prior year.

But the greening of the Institute goes beyond the building materials. The office uses recycled paper, is transitioning to electronic medical records, and uses hemp scrubs and gowns that employees wash, rather than paper ones that they throw out.

Outfitting an environmentally friendly office was “not cheap,â€ Sharon admits. But she believes that energy savings will offset the cost over time. And being in the business of health–the Institute provides everything from OB/GYN to personal training to cosmetic procedures–means providing a “true healing environment,â€ Sharon says. That goes for the nine-person staff as well, she adds. Employees prefer to work at the newer office, with its natural light and