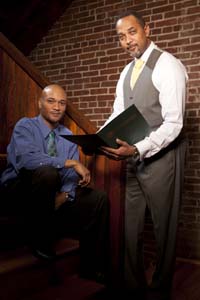 Craig T. Williams was reading a newspaper he doesn’t normally read while dining in a restaurant that he normally doesn’t frequent when he came across an article that would have a profound impact on two lives. Through the article, the CEO and president of Pride Enterprises Inc. (No. 95 on the BE Industrial/Service Companies list with $22.5 million in revenues) learned about how a young, black Iraq War veteran was injured in combat, displaced in the economy, and working as a security guard at the University of Pennsylvania.

For Williams, reading the article proved fortuitous. While Norristown, Pennsylvania-based Pride Enterprises had fairly steady revenue gains, the building, construction management, and consulting firm generated nearly 35% of its revenues at that time from projects for the Department of Veterans Affairs. And a lot of those revenues were being shifted toward companies led by military veterans. “Almost overnight [business with the department] went down to zero,â€ Williams recalls. “We looked at that situation and thought, ‘Man, we have to figure out a way to replace that revenue stream.’â€

Williams concluded that if his company was to continue to do business with the Department of Veterans Affairs, he needed to partner with a veteran and establish a new business. The veteran, Richard Bennett, seemed tailor-made for the task. After all, he studied architecture and the article stated his interest in a career in the construction industry. “I thought, my God, this is my guy. So we tracked him down through the author of the article and set up an initial meeting,â€ says Williams, 44. “I brought him in and told him what I was thinking, and we talked about it for a while.â€ During that period, Bennett worked for Pride Enterprises as an estimating coordinator and Williams’ mentorship role began.

In less than a year, Bennett and Williams felt they could do business together and formed Fidelis Design and Construction L.L.C. in 2009. Bennett has a controlling ownership stake in Fidelis; however, Williams, who owns less than 40%, shares in the profits. “I helped him develop the branding strategy, and he came up with the name, came up with the logo, and we collaborated on the business plan,â€ recalls Williams. A little more than two years later and Fidelis Design & Construction generates just more than $10 million a year. And Williams, whose firm is a newcomer to the be 100s, may well help usher in one of the next generation of be 100s CEOs.