A Random Walk Down Wall Street (With Protesters) 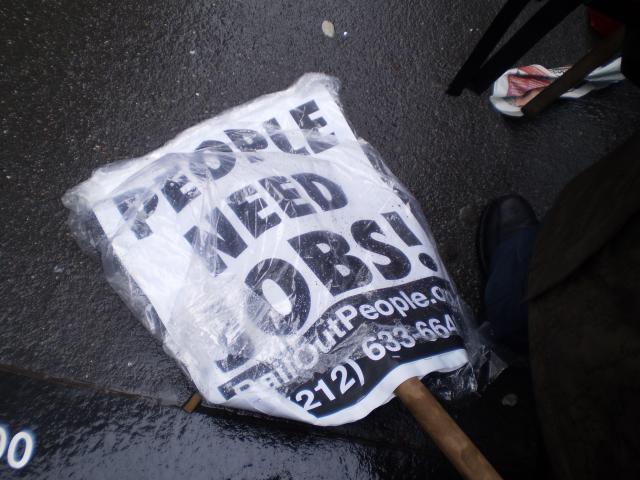 On my lunch hour last Friday, I went down to lower Manhattan’s financial district–the nerve center of global finance–to witness a few hundred protesters yelling at the tops of their lungs at the corner of Broadway and Wall Street. College kids and community organizer-types had gathered in the rain to decry the federal government’s Troubled Assets Relief Plan, better known as TARP. A chorus of “bailout the people, not the banksâ€ echoed off the cavernous brick-front buildings.

The spring downpour wasn’t enough to dose the protesters’ palpable anger. The throng was orderly, but they fumed at financial institutions and those in government. Some held signs and banners that read: “People Need Jobs!â€ and “Housing is a Human Right.â€ A few of the posters were more pointed in their criticism. “Obama’s change is in Wall Street’s pockets,â€ read one sign.

This “March on Wall Street,â€ had been planned for April 3 and 4 by a coalition of activist groups operating collectively as the “Bailout the People Movement.â€ The group has held protests across the country and is organizing a series of upcoming public meetings in other cities including Baltimore, Boston, Detroit, Los Angeles, and Raleigh, North Carolina.

After a few rousing speeches from organizers, the protesters began to march, making their way through the financial district’s maze-like streets. The government money aimed at revitalizing banks miffed the participants I talked to. They decried foreclosures and unemployment, and espoused a general notion that “capitalism is the largest system of organized crime,â€ as one man with graying dreadlocks screamed through a bullhorn. (No one I chatted with wanted to give me their name. Although I identified myself as a journalist, dressed in a suit and tie mingling in the crowd, I must’ve seemed a little out of place. One man, who snapped my picture with his digital camera, accused me of being a “fed.â€)

What struck me most about the African American protesters in attendance (they made up possibly a quarter of the crowd), was that they had long ago moved beyond the euphoria produced by a black man being charge of the nation’s economic well-being. For me, this was the first time since the election that I’d been in the midst of black people who were — each and every one — disappointed in and disparaging of the president. Of course, President Barack Obama, according to a late-February Gallup Poll, carries an 85% approval rating among blacks and latinos.Â  But if anyone needs proof that black Americans aren’t a monolithic Obama cheerleading squad, here it is. For those gathered at the protest, Obama represents another in a long line of government figureheads doing the bidding of big business and the wealthy. The argument that government needs to encourage banks (with bailout cash) to begin lending to entrepreneurs, homebuyers, and everyday consumers, would probably ring hollow with a mob worked up over unemployment and homelessness.