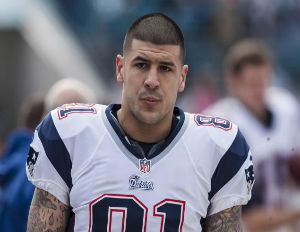 CytoSport, the company behind the nutritional supplement drink, said it was dropping their association with Hernandez immediately.

Hernandez arose the suspicion of authorities after he destroyed his home surveillance system and handed his cellphone over to police in pieces. Lloyd’s body was found near Hernandez’s home.