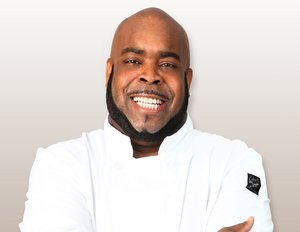 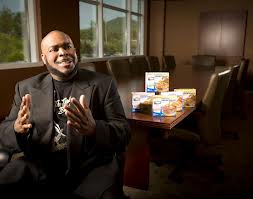 Most recognized from his appearances on ABC’s reality competition show, Shark Tank, Shawn Davis, also known as Chef Big Shake, is the creator of “The Original Shrimp BurgerÂ®,â€ a low-fat and low-calorie blend of shrimp, fresh peppers and spices that is an alternative to traditional beef burgers. Davis is the founder and CEO of CBS Foods in Franklin, Tennessee, which specializes in gourmet seafood dishes. Other products include a lobster slider and lobster macaroni and cheese.

The Original Shrimp Burger, which comes in five different flavors, is available in 2,000 stores across 26 states throughout fifteen retail chains, including Giant, Shoprite, Stop & Shop. Looking to get the product into even more retail stores across the country, Davis has turned to the crowdfuning website Indiegogo.com to launch his Shrimp Burger Revolution Tour across 10 cities starting in November.

While out on the road, Chef Big Shake Davis will be dishing out samples of his shrimp burgers at grocery stores and football stadium events, kicking off with a big tailgate party in Washington, DC for the Washington Redskins game on November 3.

“We want people to taste it, like it, and buy it,â€ Davis says.

“We’re taking the burger to the people! My daughter and I made a video to tell people what we want to do. In the video, I even dance. I have never had so much fun and I hope people like it and get the messageâ€ he adds.

The idea behind Indiegogo is to fund a project or business venture by getting small amounts of capital from a large group of people.

“We started a grassroots campaign on a crowdfunding site to try to get people to stand behind the brand,â€ Davis explains. His targeted goal is $5,000. “We have to be creative in the way that we reach out to our customers and educate them about where to find the product and also to bring new customers into the stores.â€

CBS Foods started as a small family run company operating out of the kitchen of the Davis’s home.

“When my daughter was ten, she received a pamphlet at school promoting vegetarianism. That day, she ran home and declared she wanted to eliminate all meats, except seafood, from her diet, thereon,â€ says Davis, a restaurateur and personal chef for more than 20 years. He knew that in order to keep his daughter’s protein intake at an optimum level, he would need to get creative and crafty in the kitchen. And so he did. The Original Shrimp Burger was born.

“The nationwide tour is about building consumer awareness,” says Davis. Major brands spend multi-million dollars on television commercials. While its products sit on store shelves right next to household food brand names, CBS Foods doesn’t have the money it would take to run a national marketing campaign. Says Davis, “We have to go to the streets and get the product to the people. So when they go to the store they will recognize the brand.â€

Consumers can help bring a smaller brand to the shelf and keep it there through demand.

“This is the whole point of the revolution,â€ adds Davis. “The little guy deserves a shot.â€

Chef Big Shake Davis was a contestant on season two of Shark Tank. While the Sharks denied the $200,000 investment he sought, his appearance on the show helped him to secure $500,000 from a private investor for a 30% stake of the company. Davis returned on season 3 of Shark Tank in a featured update. He has been described as one of the fastest growing and most successful entrepreneurs ever seen on the show with revenues now in the millions.

“We have been approached by venture capitalists out there. We don’t want to give up too much equity. We are trying to maintain or hold on to as much of our company as we started with,â€ Davis explains.