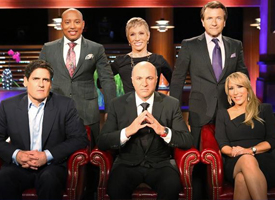 Thousands of minority- and women-owned entrepreneurs will have the chance to audition to appear on ABC’s Shark Tank, providing them an opportunity to gain much needed capital for growing their businesses. Casting directors will hold an open call on Friday, August 23, in Washington, DC during the Kingonomics Innovation, Entrepreneurship and Investment Conference. The event’s organizer, Rodney Sampson, recently signed on with Shark Tank Executive Producer Mark Burnett as executive in charge of diversity and outreach at One Three Media, a joint media and production venture between Burnett and the Hearst Corporation.

Kingonomics is the title of Sampson’s book, which is an interpretation of Dr. Martin Luther King Jr.’s economic vision for jobs and financial freedom for all Americans; through his lens as a serial entrepreneur and accredited investor primarily in technology and new media. The Kingonomics Conference, done in collaboration with the SCLC Poverty Institute, will bring together experts in capital raising strategies including crowdfunding, angel investment, and venture capital. The daylong forum and Shark Tank casting call also coincides with activities on Capitol Hill surrounding the 50th Anniversary celebration of the historic March On Washington for Jobs and Freedom.

Sampson was tapped personally by Burnett (Survivor, Celebrity Apprentice, The Voice) to spearhead his television production company’s diversity efforts. The two had worked together on the hit television miniseries The Bible; the 10-hour drama that ran on the History Channel in March 2013. Burnett and his wife Roma Downey scripted and produced the show. Sampson served on the show’s advisory board in a diversity and inclusion role to insure conversations around people of color were authentic.

Burnett sought Sampson’s assistance when he learned the ratings for the Shark Tank revealed a larger African American and female audience on Friday night at 8 pm ET.

“The challenge he said is that most of the companies that pitch are white males,â€ recalls Sampson. “He decided that he wanted diversity and inclusion to be intentional not just on Shark Tank or one show but all of his properties. That is what led to me becoming the first head of diversity and inclusion inside of the organization.â€

Sampson is charged with identifying and attracting a more diverse pool of inventors and entrepreneurs.

“Our goal is for at least 20% of the companies that pitch on the show to be minorities.”

The Shark Tank open casting call is a great forum he says especially given that access to capital remains the most important factor limiting the launch, expansion or growth of minority-owned businesses. Moreover, less than 3% of venture capital is invested in women owned and operated enterprises; less than 1% goes to African American run businesses.