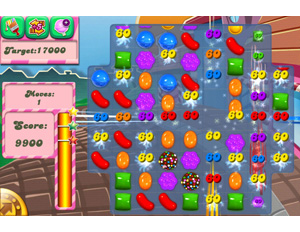 Reuters reports that it’s one of the largest gaming acquisitions since Microsoft purchased Minecraft last year for $2.5 billion.

Activision will purchase all outstanding shares of Dublin-based King Division Entertainment for $18 in cash per share. The transaction is not final until King’s shareholders and the Irish High Court approves.

“Candy Crush Saga” was one of the top ten most downloaded mobile games last year. With its user base combined with the Activation user base of franchise hits such as “Call of Duty” and “World of Warcraft,” the acquisition is poised to create a gaming base of more than half a billion active users.

Through this acquisition, Activision projects it will generate over $36 billion in revenue by the end of 2015 and will grow cumulatively by over 50% from 2015 to 2019.

“We believe that the acquisition will position us very well for the next phase of our company’s evolution and will bring clear benefits to our players and employees. We will combine our expertise in mobile and free-to-play with Activision Blizzard’s world-class brands and proven track record of building and sustaining the most successful franchises, to bring the best games in the world to millions of players worldwide. We are very much looking forward to working with Activision Blizzard,” said Riccardo Zacconi, chief executive officer of King.

In a press release, Activision stated that King Digital Entertainment will continue to operate as an independent unit, “with enhanced resources to support its industry-leading franchise.”