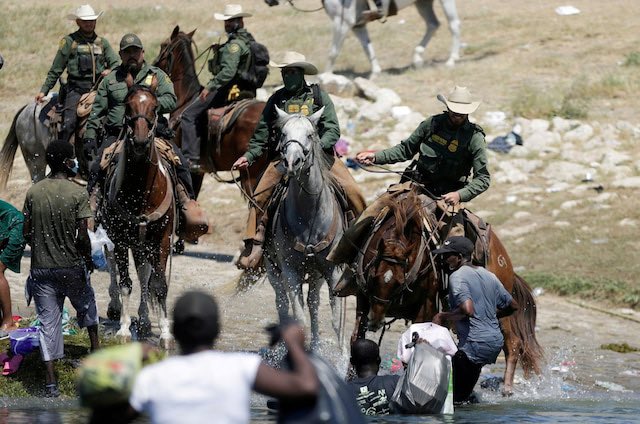 Tamika Mallory is not holding back in speaking out against the Biden administration’s response to the Haitian humanitarian crisis.

The activist responded to horrific images of Border Patrol agents who appeared to be using reins as whips from horseback to block the path of Haitian migrants attempting to cross into the United States. from Mexico.

Mallory criticized the Biden administration and questioned the Democratic Party’s lack of leadership.

“So there’s no way to get around the fact that under this administration, they are responsible,” Mallory said.

Mallory’s comments come days after the Department of Homeland Security began expelling Haitian migrants from the border town of Del Rio, TX, where an estimated 14,000 people have gathered hoping for legal asylum in the U.S.

Mallory questioned why Democrats are not speaking against the administration’s actions and the disturbing images that mirror the inhumane treatment used on slaves. Mallory posted on Instagram,” I open my Instagram for the first time in about 10 hours and see white men whipping our Haitian bothers.”

Mallory also mentioned Biden’s failure to address the most recent updates on the immigration crisis in his United Nation’s address Tuesday morning: “I didn’t hear anything about whips,” Mallory said.

“They are responsible,” Mallory said of Biden and Vice President Kamala Harris, using their names. “There’s nobody else.”

Mallory said that while the Department of Homeland Security is to blame—especially the main Border Patrol agent who was seen in a viral video cursing at a Haitian migrant—Biden and Harris are “the ones that have a responsibility to deal with this. It should have never happened under their watch.”

“This is much bigger than just one group of Border Patrol agents. His boss needs to be fired, and their bosses,” Mallory said, “not the man with the whip.”

“Protection of the border has a whole hell of a lot to do with corporate interests,” she added. “But they’re very much so connected. You’d be surprised who actually runs this country.”