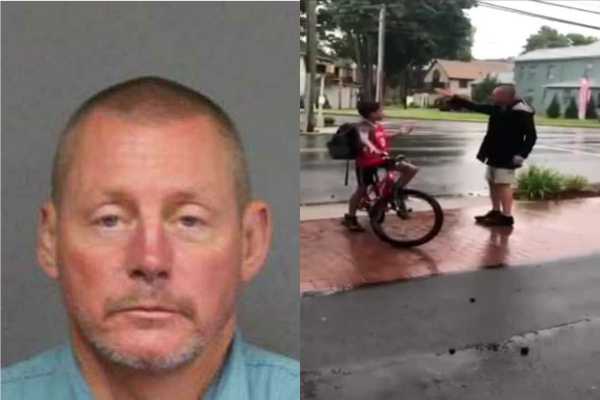 Jameson Chapman, 48, is seen pushing 11-year-old Daniel Duncan off of his bike (YouTube/Screenshot)

A group of community activists has taken to Deep River, Connecticut, to demand a white man seen pushing an 11-year-old biracial child off his bike face hate crime charges.

On Wednesday, the activists held a press conference to bring awareness to a disturbing video that shows Jameson Chapman, 48, pushing 11-year-old Daniel Duncan off his bike last Monday and telling the child to “get the f–k out of my town.”

Police say the encounter happened after Duncan and his friend accidentally bumped into Chapman on the street.

When Daniel replied, “No,” Chapman shouted,

When Chapman ran into the boys later, he told Duncan to “Get the f–k off your bike” before shoving the child to the ground.

Chapman faces charges of third-degree assault, breach of peace, and risk of injury to a child, Fox 61 reports. But activists think he should face bias or hate crime charges for seemingly singling out the biracial Black child.

“I feel that he targeted my son because he’s dark. He’s a biracial kid,” the boy’s mother, Desiree Dominique, told Inside Edition.

She noted how upset she was after seeing the video. Dominique says Duncan is still traumatized from the incident and is concerned about people in the town who seem to support Chapman.

“We feel as though this is more of a hate crime than it is a risk of injury to a young kid,” Rev. Dr. Boise Kimber with the Greater New Haven Clergy Association said. “Why did he have to single out this one biracial Black individual?”

Chapman was released on a $10,000 bond and is scheduled to appear in court later this month. The activists argue his bond would have been higher if the child was white.

First Selectman Angus McDonald says the town is planning public forums and workshops open to the public to discuss the encounter and solutions for the community. But Kimber says those conversations need to include people of color.

“We must be at the table to share our concerns on how we desire to be treated in a white society,” he said.