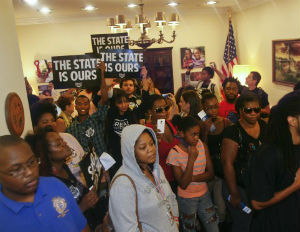 Marissa Alexander, a domestic violence survivor and mother of three whose 20-year prison sentence for firing a “warning shot” at her abusive husband attracted nationwide attention, now faces 60 years in prison if she’s re-convicted. Alexander had been serving a 20-year sentence for aggravated assault when a judge ordered she receive a new trial. Alexander tried unsuccessfully to use Florida’s Stand-Your-Ground law in her defense.

But now, Florida State Attorney Angela Corey wants to retry Alexander on three counts of aggravated assault. The state legislature sets the sentencing guidelines and under Florida’s 10-20-Life mandatory minimum law for crimes when a gun is involved. Meaning, Alexander could receive up to 20 years for each charge.

ColorOfChange.org, the nation’s largest online civil rights group, is demanding that Florida Governor Rick Scott take definitive action to suspend State Attorney Angela Corey and condemn the charges against Marissa Alexander. ColorOfChange Executive Director Rashad Robinson explains, “State Attorney Corey has rejected persistent calls to drop the case once and for all, and instead has chosen to ramp up her shameful prosecution against Marissa. National outrage about Marissa’s case continues to grow and Governor Scott could pay a political price at the polls during his tight re-election campaign for Governor unless he takes action.â€

With more than 900,000 members, ColorOfChange.org is the nation’s largest online civil rights organization. “Governor Scott has the power and responsibility to intervene and demand justice for Marissa and for Florida as a whole,â€ adds Robinson. “By demanding that Gov. Scott hold Corey accountable for her actions, we have a real opportunity to move forward a national conversation on the ways in which black people are mistreated in our criminal justice system – and take steps to secure systemic change.â€

Alexander was arrested on Aug. 1, 2010, after firing one shot inside her Jacksonville, Florida home. There were no injuries. Corey claims she fired the shot out of anger, not fear. Alexander was charged with three counts of aggravated assault for allegedly endangering the lives of Gray and two children in the home. After refusing a plea deal for three years in prison, the presiding Circuit Court Judge sentenced her to three 20-year stints to be served concurrently.

Alexander’s original May 2012 conviction was overturned Sept. 26, 2013, by the First District Court of Appeal in Florida, which found the presiding judge at her trial unfairly instructed jurors she had to prove her claim of self-defense. The 33-year-old Alexander was released on bail Nov. 27 after 21 months behind bars. Her retrial is slated to begin July 28.

Known as the “killingest prosecutor,” Florida State Attorney Angela Corey has a history of unjustly and excessively punishing African American defendants. True to form, she now intends to send Marissa Alexander – a domestic violence survivor and black mother of three – to prison for 60 years for firing a warning shot in self-defense to stop her abusive husband. In 2012, Marissa was unjustly sentenced to 20 years in prison, and after immense public outrage, she won her appeal and was set free last September.

Over the past 5 years, Corey has sent 21 people to death row – more than any other Florida prosecutor – 66% of which has been African Americans despite the fact that African Americans account for only 16% of the population in her district. Additionally, Corey’s refusal to acknowledge racial bias has led to accusations of prosecutorial misconduct, most recently in the murder trials of George Zimmerman and Michael Dunn, who were both “let off the hook for killing black youth,â€ notes the ColorOfChange.

“As long as Angela Corey remains at her post, Florida’s criminal justice system will continue to fail black folks. Black women face unique harm and discrimination in the criminal justice system, and are today’s fastest growing population of people in prison. Black domestic violence survivors are disproportionately more likely to be punished for the abuse and violence they experience,” concludes Robinson.