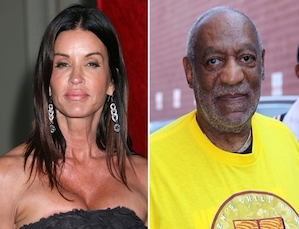 The 59-year-old talent recently came out in an interview to Entertainment Tonight that aired Tuesday. In it, she says that the Cosby Show creator assaulted her in 1982 after a dinner in Lake Tahoe where the comedian was performing.

According to Dickinson, Cosby gave her a pill and a glass of red wine, after she complained of experiencing stomach pains. “[The next morning] I wasn’t wearing my pajamas, and I remembered before I passed out that I had been sexually assaulted by this man,” Dickinson told ET. “Bill Cosby in a patchwork robe, dropping his robe and getting on top of me,” were the last things she remembered.

With that much hoopla defaming Cosby’s name in public, it appears that Netflix is one of the first to take a step back as allegations continue to fly in. The online streaming service has nixed the plan to air a Bill Cosby special after two other women have accused the comedian of sexual assault. “At this time we are postponing the launch of the new stand up comedy special ‘Bill Cosby 77’,” Netflix said in a released statement.

The other women making accusations are Joan Tarshis and Barbara Bowman, who, in addition to Dickinson, came out publicly with accusations that the comedian raped them. Cosby, 77, has never been formally charged as a criminal in any of the cases he’s been accused of, but did settle a civil suit in 2006 with another woman over an alleged incident two years before.

Cosby’s attorney, John P. Schmitt, issued a statement Sunday saying his client would not dignify “decade-old, discredited” claims of sexual abuse with a response. Dickinson wrote about the Cosby incident in her 2002 autobiography, No Lifeguard on Duty: The Accidental Life of the World’s First Supermodel. She claims that Cosby’s lawyers pressured her and the publisher to remove the details.

Bill Cosby still has a sitcom in development with NBC pegged for release in 2015.