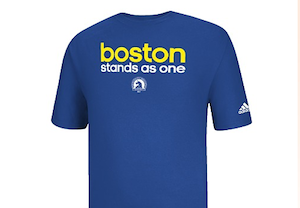 In an effort to further show support for those suffering from the tragedy of the Boston Marathon bombings, Adidas is selling a limited edition T-shirt with the words “Boston stands as one,â€ with the Boston Athletic Association logo underneath.

Adidas is the official sponsor of the Boston Marathon and the shirts will sell for the meaningful price of $26.20.

The Boston Celtics Shamrock Foundation has committed to raise $200,000 to support The One Fund Boston that will provide for the affected families in the Boston Marathon tragedy through a $100,000 pledge from the Shamrock Foundation, as well as multiple team initiatives to raise an additional $100,000.

“Our Celtics family and our fans join all Bostonians in demonstrating our city’s great strength by coming together to stand as one to get through this difficult time,â€ Shamrock Foundation president Stephen Pagliuca said. “We are proud of all the heroic efforts that were made during this horrible tragedy and would like to show our support to those victimized by this terrible act.â€

According to USA Today Sports, all proceeds will go to The One Fund, a charity that was announced Wednesday by Boston Mayor Tom Menino and Massachusetts Governor Deval Patrick. The One Fund will aid those affected by Monday’s attack.