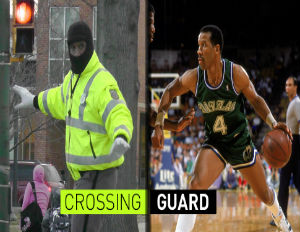 Former Utah Jazz player Adrian Dantley wasn’t your typical NBA baller who blew all his money and ended up broke. Dantley was frugal when he was in the NBA during the ’80s. He’s a millionaire and stillÂ  lives in the 1.1 million dollar homeÂ  he bought in 1990, owning it free and clear. So why is he working as a crossing guard outside of Silver Spring Maryland, pulling morning and afternoon shifts for $14,685.50 a year?

“He’s not going to just sit around,â€ a friend of Dantley’s told Deadspin, “and he just doesn’t want to pay health insurance.â€

NBA veterans aren’t provided health insurance by the league, not even all-star players like Dantley. And according to Deadspin, the crossing guard job has become one of Montgomery county’s most popular for those seeking health care coverage. Crossing guards are part-time employees, usually only working a few hours a day, but they receive the same insurance and benefits package as full-timers.