Advice For Athletes: Don't Go Broke, Invest in Your Future 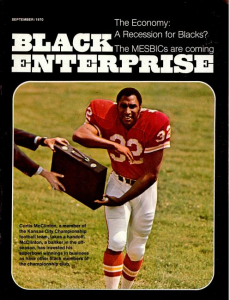 In the September 1970 issue of Black Enterprise, only our second issue, we published our first cover story on the business endeavors of prominent black athletes, with a focus on the reigning Super Bowl Champion Kansas City Chiefs, including cover subject and halfback Curtis McClinton. It may be hard to imagine today, but professional sports was not the road to guaranteed riches that we’ve now come to believe it is. In fact, in that issue we reported that the typical salary of an NFL running back of that era could be as low as $25,000–about $150,000 in 2013, adjusted for inflation. (Not bad, but not millions, either.) Endorsement deals, reality TV stardom, or a career as a cable TV sports analyst? Forget it.

In those days, professional sports was an exciting, challenging part-time job, perhaps bringing a measure of fame, but hardly enough to bankroll the glamorous lifestyles and extravagant spending of today’s multimillionaire sports stars. Moreover, it was a job all but guaranteed not to last past a player’s mid-30s, with luck. As a result, athletes of McClinton’s generation recognized the need to identify ways to earn income not just for when their playing days were over, but to supplement their salaries as pro athletes. Even the best players of that era, such as Hall of Famers Alan Page of the Minnesota Vikings and the Green Bay Packers’ Willie Davis, prepared for a life after the game, pursuing both education and business opportunities. Page, now an associate justice of the Minnesota Supreme Court, and Davis, an accomplished business leader and former BE 100s CEO, understood something that seems lost on many of today’s athletes: the opportunities represented by a career in pro sports are meant to be invested, not squandered.

There are ready examples of former stars who have gone on to great business success, including Earvin “Magicâ€ Johnson, that can serve as inspiration for what’s possible when athletes translate the income, relationships, and connections that come with pro sports into lucrative opportunities once they hang up their jerseys. The sad truth is that although today’s athletes make many times the salaries of their predecessors (the NBA minimum for an athlete with one year of service was nearly $800,000 in 2012), too few have parlayed that additional income into successful businesses or the solid educations, including advanced degrees, that could provide financial security and wealth-creation potential in the long term.

Instead, we routinely see the headlines about bankrupt former athletes, such as Antoine Walker, Allen Iverson, and Terrell Owens, losing their homes, struggling to pay child support, and otherwise desperately grasping at the smoke of lost opportunity. Blinded by unthinkable amounts of income during their careers, they never stopped to learn how to earn, manage, invest, and preserve real wealth.

To today’s young athletes, I say that there’s a better way. Try on a new kind of throwback, to the days when the likes of Franco Harris and Julius “Dr. Jâ€ Erving transformed their sports celebrity into lucrative business relationships. Brand yourself as being serious about business and career opportunities while you’re hot; opportunities to learn from the world’s top CEOs and most connected executives won’t be there when you’re not. Invest your wealth in education in the offseason, not just to earn that overdue undergraduate degree, but to prep for a stable and rewarding career when your playing days are done. Master the subjects of investing and entrepreneurship, qualifying yourself to prudently manage the wealth you’ve earned.

Spend less time, money, and energy getting into the VIP room at the club, and more time gaining access to the C-suites and executive boardrooms where the real players play. Take a page from the great athletes and Hall of Famers of bygone days. Invest in your future, not in your fame.