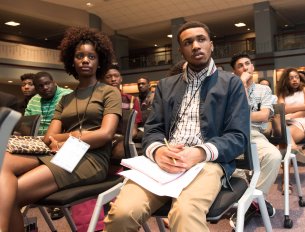 Over two days in June, some 100 youth leaders gathered in Washington, D.C., for the first White House Summit to support African American LGBTQ youth. Tragically, less than 48 hours after the opening day of the summit, a devastating massacre occurred–a gunman killed 49 people on “Latinâ€ night at an Orlando gay nightclub, injuring another 53 patrons.

“We do the work we do, because it’s really important to provide individuals a space to talk and to be at the center of the solutions, but also because sometimes, it’s not until something tragic happens that we have these conversations,” notes David J. Johns, executive director of the White House Initiative on Educational Excellence for African Americans.

Millions of students are victims of bullying each school year, and studentsÂ that identify as lesbian, gay, bisexual, or transgender (LGBT) are more likely to become targets. A 2013 GLSEN National School Climate Survey documenting the experiences of LGBT youth found that over half of LGBT students felt unsafe at school because of their sexual orientation, with 74.1% reporting that they were verbally harassed, and 36.2% reporting that they were physically harassed throughout the school year.

Multiple reports have come to the same conclusion. A Gay-Straight Alliance Network and Crossroads Collaborative report found that schools nationwide are hostile environments for LGBT and gender-nonconforming students of color. Likewise, a California Safe Schools Coalition study found that there was a significant overlap between race-based and sexual orientation-based harassment at school. Additionally, a study published in the June 2014 issue of The America Journal of Public HealthÂ showed that the prevalence of suicide attempts was significantly higher for LGBT youth of color, compared to their white LGBT youth counterparts.

“Students thrive when they feel safe, supported, and engaged. LGBT students perform better in school and report greater happiness when they can identify at least one caring and concerned adult who they can turn to, a student alliance they can belong to, and a curriculum that is meaningful and relevant to their lives,â€ says Lauren Mims, assistant director of WHIEEAA.

The mission of the summit, hosted along with the National Black Justice Coalition and the National Education Association, was to examine promising strategies able to provide safe and supportive environments that African American, LGBT/SGL self-identified, youth can learn and develop. The summit highlighted the economic and social impact of excluding or otherwise failing to support African American LGBT youth. In addition, African American LGBT youth shared their firsthand perspectives and contributed to designing solutions, to address critical needs.

“This summit was critical for black LGBT youth, who need to be affirmed and celebrated as experts,â€ says Jared Brown, operations director of The Black upStart, a social enterprise to support aspiring African American entrepreneurs. “It is essential for all young people to be supported in living authentically. The summit [was about] ensuring that young, black LGBT leaders knew their power, and used it to improve the schools and communities charged with our care.â€