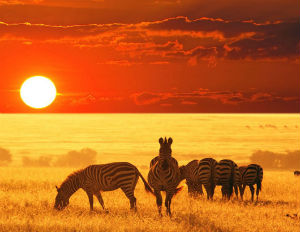 According to Citibank, the American dollar is the strongest its been in 40 years. Since the start of 2015, the value has increased about 14%, which means that “Just about everything from hotels to luxury handbags toÂ McDonald’s hamburgers is cheaper abroad than in the United States right now,” CNN reports.

The same is true for airfare, making some of the world’s best vacation spots friendlier on your pockets than they have been in previous years. With summer almost here, think about traveling to these more affordable travel destinations.

Now, it’s 13% cheaper to vacation in South Africa as the country’s currency is losing value against the U.S. dollar. Flights leaving New York headed to Capetown are 24% less than they were last year. Plan a thrilling and educational getaway for your little ones on a South African safari.

If you’ve always wanted to experience the sunny climate and party with the festive people, now is your chance. The Brazilian currency lost nearly 30% in value against the U.S. dollar as compared to last year, according to CNN. Hotels are also 12% cheaper, but prices are expected to jump soon for the Summer Olympics in 2016.

A year ago, one American dollar equaled 45 Russian roubles. Now, the same American dollar equals 57 roubles. CNN reports that the dispute between Ukraine and Russia has deterred travelers, so now the tourism industry is trying to attract visitors with significant discounts. Flights from New York to Moscow are 37% down in cost, while hotel costs fell 45%.

The city full of love and romance is a dream getaway for may vacationers, and the destination may actually be a reality this summer if travelers have $519 to spare. Some roundtrip flights to Paris are that low. Other European hot spots, like Germany, Italy and Spain, are also cheaper than before—nearly 20% less than a year ago.

The United States dollar bill has an 18% increased value on Colombia’s peso within the past year, hotels are reportedly down 10%. Bogota, the capital, and Medellin, Colombia’s second biggest city, are also evolving into tech and cultural targets. For the traveler who wants to go and soak up the sun, the country has plenty of breathtaking beaches.