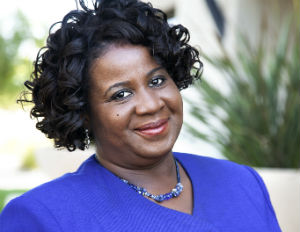 Competitive, self-disciplined, hardworking, the St. Louis born, Chicago raised Lisa Hutcherson had devoted 18 years to retail management at various locations — from big box stores to specialty shops. But at one point, Hutcherson’s sales career had hit a wall. Something was missing.

“I knew my craft but I wanted recognition — a plaque with my name on it that said I was the best at something,” she said, sharing that her efforts for so many companies over the years always seemed to earn accolades and financial rewards for others. Quickly hitting the income ceiling in each successive position, she’d move on.

Take control of your own future. Eventually, she found the opportunity to redirect and redefine her career in an area she had not previously considered: selling life insurance under the Aflac banner. That was 12 years ago. Today, Hutcherson is an Aflac District Sales Coordinator based in the Sacramento area. Her years of perfecting her sales craft served her well from the start. And this time, duly earned appreciation didn’t elude her. She found herself earning six figures within three years and has amassed multiple company sales awards and other bonuses. “My husband and I love travel, and I’ve been able to qualify for many wonderful trips, all paid for by Aflac,” she said.

Believe in what you do. Such benefits are satisfying, but there are more profound reasons why Aflac has become more than just a professional home for Hutcherson. For one, she believes deeply in what she’s selling. “My sister Vickie passed away in 1980 when she was 24. Sadly, my dad thought she was covered under his insurance until age 26; the cutoff date was actually 22. My sister had no insurance. It was devastating. There is nothing worse than having to work out a lay away plan with the funeral home.” A tragic story but Hutcherson puts it to positive use–helping prospective customers, especially young adults, understand the value of making an important decision to protect their future. She says: “We are more ready to insure our things — our material possessions — than in what really matters.”

Become a community leader. Help others succeed and leave your mark. Aflac has given Lisa the opportunity to open doors for African Americans in the insurance industry. A beneficiary of the company’s diversity initiatives and its mentor-mentee program, she is proud to be a top recruiter of women and minorities in her region: “I have been very successful in that role. I love being able to help recruit a field force that looks like me, especially here in Sacramento, which is the most diverse city in the country. Helping others come in and succeed is my way of leaving my mark.” Choose your own route to success. Hutcherson’s pitch to recruits is persuasive because it’s steeped in her own experience. “I always ask, ‘What draws you here?’ Some say it’s because they believe in our insurance policies. For others it’s about earning top dollar — putting food on the table. The rest like the idea of recognition — they like to win and get that acknowledgment.” “I tell them that at Aflac you can have all three. Success is in your hands,” she said. At the end of the day, this lady is clearly in the driver’s seat. Learn more about a career with Aflac.