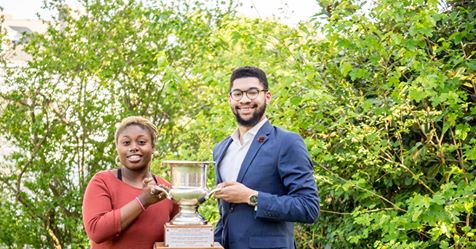 Bligen and Buckley are the first African American debate team to win the NPDA nationals, and the two are the most decorated debaters in Mercer’s history, according to WRBL.com, which reported on the historic win.

I spoke with Bligen and Buckley earlier today. Both have been involved in debate since high school. Bligen credits his mother for encouraging him to pursue debate.

“My mother told me it was important to master the English language, both in writing and orally. She knew I liked politics and liked to talk. She said I should join the debate club.”

Buckley joined her school’s debate team because of the influence of friends. “I thought I would try it because I always wanted to be an attorney.”

After graduation, Bligen will manage a nonprofit he’s started; then head off to Harvard to pursue an M.B.A. and master of public administration. Buckley intends to pursue law at UCLA and become a civil rights attorney.

“As a black woman, I’m interested in applying the law to help those that have been systematically disenfranchised in the past,” Buckley told me. “I think that’s the best use of my talents not only as a debater and an academic who’s good at arguing, but also as a person who cares about helping others.”

The benefits of debate are many; however, in general, few black students participate on either the high school or college levels.

“You can go to a tournament where 400–500 people are competing and see maybe 10 black people there,” Bligen told me.

Yet, being able to articulate your positions, thoughts, ideas, and emotions is always valuable, says Buckley, who, according to WRBL.com was the first African American to be named top speaker at the NPDA three years ago.

Both seniors volunteer in an after-school program as debate coaches. Buckley says debate teaches youngsters that they have a voice, their voice matters, and they can speak up. She calls debate a tool of empowerment.

As a team, they won; but even as individual competitors Bligen and Buckley excelled: Bligen was named fourth-place speaker, and Buckley, fifth place, WRBL reports.