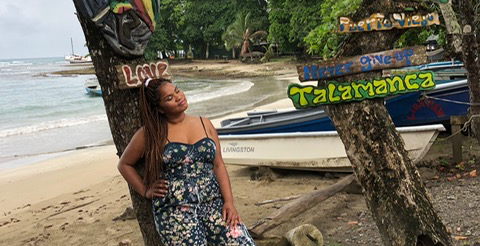 Good news for folks traveling to Costa Rica—there’s officially a Black and woman-owned travel agency in the area and it’s founded by a native.

Sadie Jordan launched Soul Life Travel to fill a need for representation, particularly in the Caribbean coast of Limón.

“There was a void in the travel industry,” Jordan told Travel Noire.

“I am Afro Latina,” she continued. “My mother is considered mestiza and my dad is African American. Growing up in the states, I was surrounded by a lot of Dominicans and Puerto Ricans, and I felt my family was the only Afro-Costa Rican one you would meet. People knew about so many places in Latin America, but many people didn’t know about the Afro-Latino culture in Costa Rica.”

Jordan said there’s a lot people don’t know about Afro Costa Rican culture. She hopes people will learn by doing the research and planning trips for them. Her goal is to bring people together for culture, wellness, and adventure in the often overlooked Caribbean coast, which is “near and dear” to her heart.

“I created Soul Life Travel to show Black and brown people our cultures. A lot of things connect us, whether it be our cuisine or how our mama’s throw down in the kitchen, and so many experiences,” she said.

“We want people to have a holistic view of the country and not go on the traditional travel circuit. It is paramount for us to showcase the Caribbean coast because, historically, it’s been out of the travel and tourism circuit. We want to make sure that a lot of our dollars are going back to that area so locals can reinvest in their own companies.”