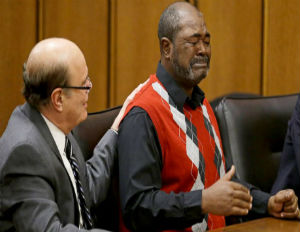 In 1975, three young men were wrongfully convicted of the murder of a Cleveland salesman and were sentenced to death. Brothers Kwame Ajamu and Wiley Bridgeman, along with their childhood friend Rickey Jackson, were convicted although they did not commit the crime. Ajamu, formerly known as Ronnie Bridgeman, spent 28 years in prison because of the false conviction. After his brother and Jackson had their names cleared and convictions thrown out by the court several weeks ago, Ajamu became the third to be exonerated.

[RELATED: WATCH VIDEO BELOW OF MAN WRONGLY CONVICTED ON FOX 8].

The three former death row inmates are now free men. Ajamu changed his name so he could start fresh and begin a new life. Eddie Vernon, the only witness, has recanted the testimony he gave as a 13-year-old. At the time of the murder, Ajamu was 17; Bridgeman, 20; and Jackson, 19. In 1978, both brothers’ sentences were changed to life in prison; Jackson’s had been changed the year earlier. While the brothers were serving time, theirÂ mother, sister, and another brother had passed away. Bridgeman was within three weeks of his execution date when the tables finally turned. Nearly 40 years after the killing, Ajamu received the call that changed his life. Jackson phoned him from a courtroom in Cleveland where he shared the earth-shattering news with his brother about Vernon changing his story.

According to reports, the Cuyahoga County prosecutors have filed to dismiss the charges against all three men. An affidavit was submitted by the Ohio Innocence Project stating that Vernon had lied about witnessing the crime, and that detectives had forced the young boy to implicate a false story. Vernon finally came clean and admitted he was nowhere near the murder when it happened. While he did hear gunshots, he did not see anything because he was on a school bus on a different block. Vernon also claimed that detectives said they would arrest his parents if he did not comply with lying to the court, scaring the then 13-year-old. There was also no physical evidence, leaving Vernon the only testimony and hope that the three innocent young men had. Ajamu opened up about the court clearing, recognizing that there is no point on dwelling on the negative, and that there are always stories worse than your own. He also reportedly forgave Vernon several years ago, knowing that the young boy was forced into telling his version of events at the trial. Despite spending the last 27 years of his life in prison as a guilty man awaiting a death sentence, Ajamu holds a positive outlook toward life and will now walk free knowing the world has learned the truth, giving him a second chance. The three men are expected to file for compensation against the Ohio Court of Claims, which would provide them with $40,000 for each year they were wrongfully held in prison.

The brothers’ attorney,Â Terry Gilbert, thanked prosecutors for dismissing the charges, stating, “They’re doing the right thing. They’re also to be congratulated for recognizing that there was an injustice here. It’s not often you see prosecutors rise to the occasion to undo a wrong that has existed for 40 years.”