After Being Sentenced To 9 Years In Russia, Brittney Griner Could Do Time In A Penal Colony 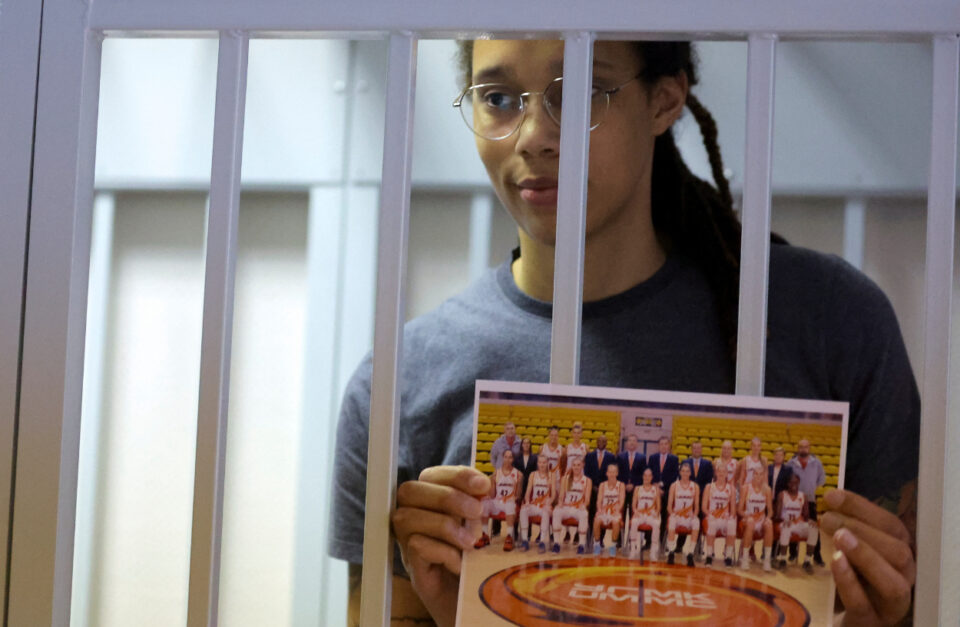 (Image: U.S. basketball player Brittney Griner, who was detained at Moscow's Sheremetyevo airport and later charged with illegal possession of cannabis, stands inside a defendants' cage before a court hearing in Khimki outside Moscow, Russia August 4, 2022. REUTERS/Evgenia Novozhenina/Pool)

WNBA player Brittney Griner was sentenced to nearly 10 years in prison on Aug. 4 by a Russian court in Moscow, and according to the Washington Post, Griner could serve her time in a penal colony.

The Russian penal colonies consist of nearly 520,000 inmates who are required to perform labor during their sentence in camps compared to gulags. Gulags were widely known to exploit prison labor in the Soviet Union to build infrastructure and punish political prisoners.

A spokesperson for Alexei Navalny, a politician critical of the Kremlin who spent time at a penal colony after being poisoned, described one colony outside of Moscow as “a monstrous place.” Navalny described the penal colony as a “friendly concentration camp” and accused guards of denying him medical attention. Nadezhda Tolokonnikova of the feminist group Pussy Riot, went on a hunger strike to protest the conditions in the penal colony where she served time. According to the Guardian, Tolokonnikova said that she was forced to work from 7:30 a.m. until 12:30 a.m. and only received an average of four hours of sleep nightly.

Diplomatic efforts by the Biden Amdministion could result in Griner and fellow American Paul Whelan being traded for Viktor Bout, a Russian arms smuggler doing time in the United States. Biden released a statement after the verdict.

“Russia is wrongfully detaining Brittney. It’s unacceptable, and I call on Russia to release her immediately so she can be with her wife, loved ones, friends, and teammates. My administration will continue to work tirelessly and pursue every possible avenue to bring Brittney and Paul Whelan home safely as soon as possible.”

Griner was convicted on Thursday of having 0.702 grams of cannabis oil inside of vape cartridges found inside her luggage at the Sheremetyevo International Airport last February. She had been in the country to play with UMMC Ekaterinburg during her off-season from the Phoenix Mercury. Griner apologized to her teammates for her mistake and said she unknowingly packed the vape carriages in a hurry.