After Black Syracuse Officer Was Punished For Listening to Rap, A Community 'Pulls Up' 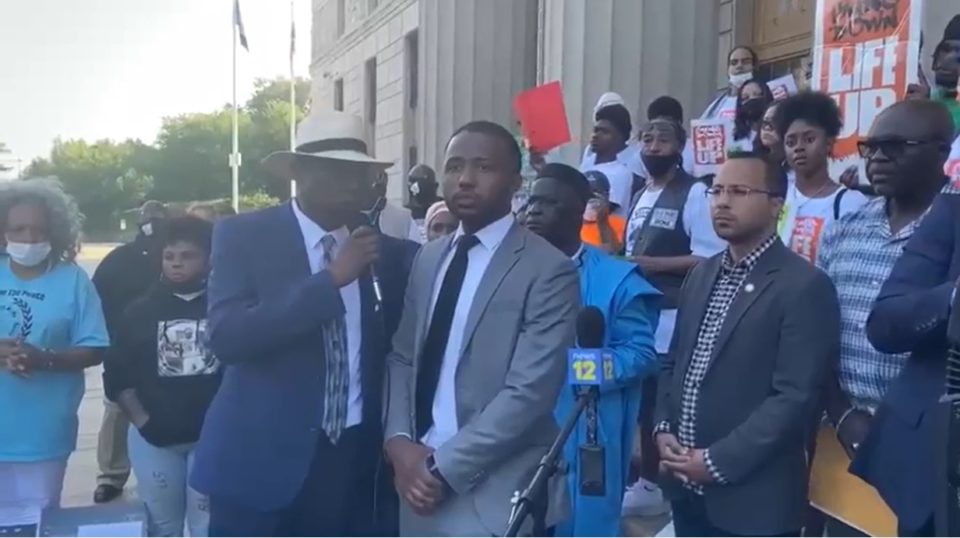 Syracuse Police Officer Brandon Hanks speaks at a press conference in New York City, where he accused the department of treating him as an outcast. (Screenshot)

About 50 people joined with the mother of officer Brandon Hanks amid his racial discrimination claims against the Syracuse Police Department.

On Friday, Michele Vanfossen organized a local march supporting her son amid his racial discrimination and retaliation claims against the city police department, Syracuse.com reports. Vanfossen had her knee walker in tow as she led marchers past the Public Safety Building, which houses the headquarters for the Syracuse Police Department.

The dedicated mother still managed to march and spread awareness about Hanks’ case despite recently breaking two toes after tripping over her dog.

Earlier this month, Hanks filed a notice of claim against the Syracuse Police Department over allegations of “conspiracy” by white officers who aimed to prevent Hanks from getting a promotion to a gang-violence task force, The Daily Beast reports.

“They cast me off as a gang member, a gang affiliate because I like to play basketball with kids and I’m involved in my community,” Hanks said at a press conference in New York City this week. “One thing that I want to tell you guys here is don’t let nobody tell you or pick on you or trick you out of your spot, OK? Be who you are, remain who you came from, and provide for your community.”

The filing also claims that Hanks and other Black officers in the department were subject to a “hostile” and “Jim Crow” work culture. Released memos show that some white officers expressed concern about Hanks being promoted and made claims of him having “known associations with gang members and convicted criminals.” They also said one of his tattoos resembled that of some known gang members, among other claims.

Hanks filed a racial discrimination lawsuit against his co-workers for the “extreme racism” he experienced on June 25. Days later, on July 1, the department reprimanded him for posting a video of himself listening to rap, according to Syracuse.com.

Hanks became a social media sensation back in 2019 with his “Pull Up Challenge,” where he would challenge kids in his community to a one-on-one basketball game. If they won, they would get a pair of sneakers, and if Hanks won, the kids would have to do push-ups.

Hanks’ efforts worked to rebuild community relations between the police and the Black community. But it looks like other officers used his good deed against him when it came time for a promotion.

“I never thought this would be the case,” Hanks mother said of his allegations. “I thought they would embrace the fact that people listen to him, that people ride for him.”

The shocking memo revealed the officers’ claims against Hanks, which included listening to rap music with cuss words in it, getting tagged in a Facebook post by someone who was charged with racketeering, as well as allegedly sitting in cars with gang members.

Hanks’ mother says her son is hurt that the officers he thought would support his elevation in the department are the same ones who spoke out against him.

“I can see it’s bothering him,” Vanfossen said.