After Dropping Out in the 1960s, 77-Year-Old Vet Secures His Degree at South Carolina State University 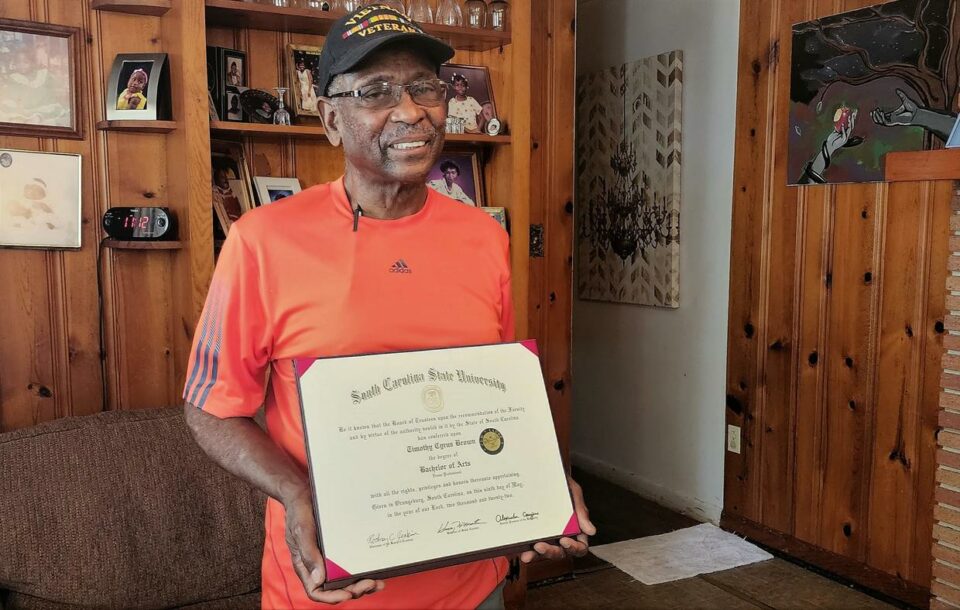 Vietnam veteran Timothy Brown has been declared a graduate from South Carolina State University at the age of 77 after dropping out in the 1960s to focus on earning a living.

CBS News reports Brown received his college degree and is now looking forward to expanding his talents as a playwright.

In 2018, the then 73-year-old learned about the Department of Veteran Affairs’ Vocational Rehab program, which helps vets transition into college, per WLTX. He joined the program shortly after. His decision to enroll at South Carolina State University paved the way for his studies as a drama major.

“I’m sitting in class with my grandkids. I always told them, ‘Hey, you know, you guys are my grandkids.’ You know, they’re in their early 20s, and here I am in my middle 70s,” Brown told CBS News. “But it was real good. I mean, I had no problem adjusting. They welcomed me very much, so everything turned out.”

As a student, Brown discovered a hidden talent for acting. His influence as a father or grandfather figure to his classmates ignited a fresh passion within him.

As graduation approached, Brown was required to write a play that he penned based on his real-life experiences. The inspiration for the play was a chronicling of his 6,000-mile round trip journey from Los Angeles to Washington D.C. to see Dr. Martin Luther King Jr. speak in 1968. Brown was proud to be able to shake the civil rights leader’s hand, saying, “it was a rewarding trip and experience because we never dreamed we would have this opportunity,” per CBS News.

Dreams do come true, according to Brown. He dreams of taking his play further by turning it into an actual production at South Carolina State University. He even hopes to star in the production along with his classmates.

“I do believe in my heart that we need to put this out so that the younger generation, younger folk, can see this and say, ‘Okay, our ancestors, some of those in the front of us actually did a lot to sacrifice so we could have these freedoms and equality that we have,'” he said. “I feel that if they could actually see that, and if we could reach two or three, I think it would be worth it. Just so they can appreciate what we went through so they would have an easier day.”