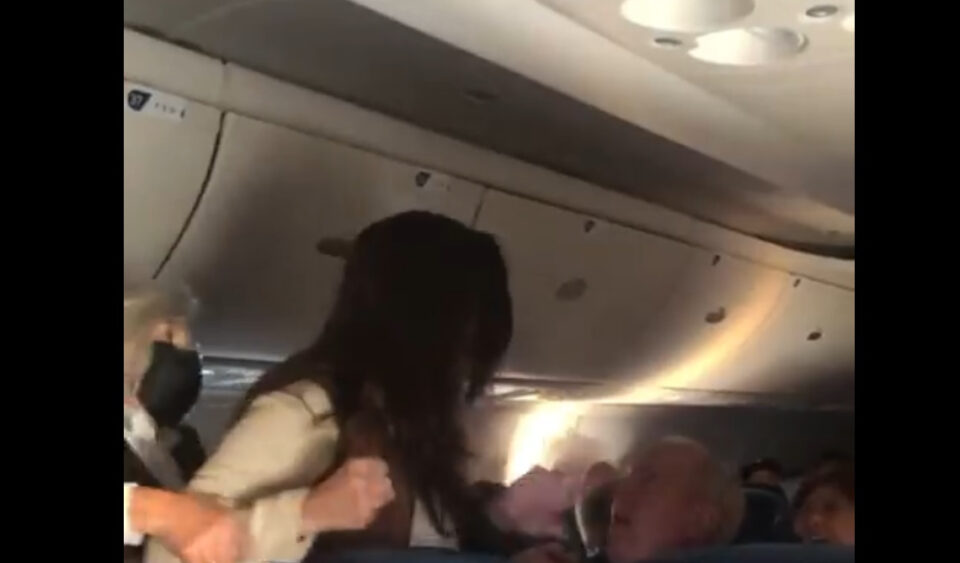 Last week on a flight leaving out of Tampa, Florida, heading to Atlanta, a white woman spat on and verbally assaulted another passenger on a Delta flight.

The angry woman, who has been coined as “Airplane Karen,” took the liberty to admonish an older man for not having a face mask on—even though she didn’t have one on either. The attack was caught on another passenger’s mobile phone, and the moment went viral on Twitter.

The passenger, Patricia Cornwall, is seen yelling at a passenger who was seated behind her in the video clip. She scolded the man for not having on his face mask, which is required on airplane flights. During the shouting match between the two, Cornwall is seen not wearing her own mask as she yells at him to place his on his face.

As Cornwall shouted at him to stand up, the white man yelled out, “Sit down, Karen.”

As someone is telling her to pull her mask up, she tells that person that the seated passenger needs to pull his mask up. He counters by telling her that his mask is down because he is drinking water, which he has in his hand.

During the confrontation, the woman yells, “What am I, Rosa Parks?” when asked repeatedly to take her seat. A white man decided to intervene for Black folks and got Karen together, saying she “isn’t Black, this isn’t Alabama, and this isn’t a bus.”

That comment pissed off Cornwall. As she continues to tell him to pull his mask up, he says to her, “You got your mask down, b*tch,” to which she responds to his comment by striking him in the face.

As she lunges toward him, the flight attendant attempts to keep her from hitting him again, and after the seated passenger tells her she is going to jail once they land in Atlanta, she tries to hit him again and spits in his face.

Cornwall is then led away by other passengers who intervened to help.

On Christmas, the Atlanta Police Department released a statement about the incident on Delta flight 2790.

“On Dec. 23, 2021, Atlanta Police responded to Hartsfield Jackson International Airport in reference to a disturbance call involving an unruly passenger on a Delta flight from Tampa, Florida to Atlanta, Georgia. (Delta flight #2790.) Upon arrival, officers met with Delta employees at gate A11 to await the arrival of the flight. When the aircraft arrived at the gate, officers were able to meet with exiting passengers who advised that the suspect, Ms. Patricia Cornwall had caused a disturbance while in the air. This disturbance lead to the injury of fellow passengers and Delta employees. Based on the statements gathered and visible evidence, officers detained Ms. Cornwall and contacted the on-call FBI agent. The officers then relocated with Ms. Cornwall to the domestic Atlanta Police precinct where FBI agents responded and took custody of Ms. Cornwall. Nothing further to report at this time.”

According to CNN, the 51-year-old Cornwall could be looking at up to a year in prison and a $100,000 fine if she is found guilty of the Class A misdemeanor.