Airports Expensive? 10 Free Things You Can Get At Airports 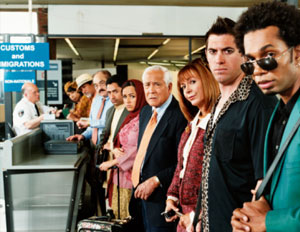 Airports have some pretty amazing amenities nowadays, like golf courses and full-service spas. But for cash-strapped travelers, some of the very best airport perks are the ones you can get for the price of showing up. The secret to bagging many of these freebies is being in-the-know.

Here’s a rundown of not-so-obvious airport extras, which are offered to travelers at no charge.

Ever since I discovered that water fountains are one of theÂ germiest places in airports, I’ve been inclined to avoid them. The alternative, then, to a water-fountain refill, is usually an absurdly expensive bottle of Fiji. But at San Francisco International Airport, flyers have access to “hydration stations” at each terminal upon exiting security. The difference between these stations and your run-of-the-mill fountain is that the former turn on via automatic hands-free sensors and feature high spigots that facilitate an easy refill. Although not many other airports, as far as I know, have refill stations, it appears to be a growing trend. Chicago O’Hare has them. And last year, the stations were installed at Atlanta’s Hartsfield-Jackson International Airport, too.

A tour of Zurich International Airport made our list ofÂ 10 Surprisingly Cool Airport Attractions; this behind-the-scenes excursion, while indeed cool, isn’t free. But a bunch of other airports do offer complimentary tours for travelers passing through. There are free Terminals to Tarmac Tours at San Diego International Airport andÂ free tours of Singapore that operate out of Changi Airport, and travelers stopping in Salt Lake City International Airport can hop onboard a courtesy van forÂ no-cost tours of Temple Square. Additionally, Turkish Airlines offers freeÂ Istanbul tours for flyers stopping in Istanbul Ataturk Airport, but you must be traveling on that airline to be eligible.