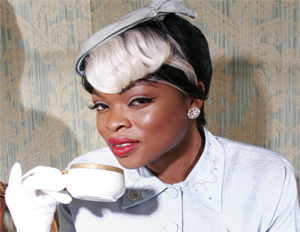 Denise Ajayi Williams is —like many power women around the globe— an entrepreneur and mother on a mission. She, with the support and encouragement of her husband Hayden Williams III, decided to take matters into her own hands to fill a void in the children’s publishing industry. What started with innocent yet intriguing observations of her young son during a trip to the book store has turned into a new superhero of color who is diversifying what power and mystique look like in the world of fantasy and action:Â Akiti the Hunter. The character, through his journey in Ajayi-Williams’ book, promotes self-confidence, mental savvy and persistence to minority youth.

Below, Ajayi Williams, who is also the founder and editor-in-chief of WorkingMomIn20s.com,Â an online platform and movement for millennial women redefining feminism, shares the full story on what inspired her to start a superhero series for children of color, and how working mothers all over the world can create their own impact for children through publishing.

BlackEnterprise.com: What inspired you to write and create the character for “Akiti the Hunter”?

Ajayi Williams: I took my son to Barnes & Noble to pick out a book, and they offer various categories for popular children’s book characters. You go from Mickey to Elmo and Disney characters, but after a while you run out of characters, particularly heroes for children that they can identify with.

I’d asked my son what he would like to take home to read, and I held up books about [several popular characters] and he’s like, “No, Mom.” I got to Spiderman and after he said no to that, I finally asked him why. He replied, “Because he doesn’t look like Daddy.”

He was definitely right. Why can’t we have heroes in books that he can associate with who look like his father or the people he admires in his family?

I decided to develop that character myself, and from that came the book.

What’s behind the story of Akiti, and what can children learn from it?

It’s based on [African] folklore that I adapted for modern day. Akiti is challenged in the book by the great elephant. He goes into battle but [faces obstacles in defeating the elephant]. He tries to use various weapons and in the end, he is able to outsmart the elephant.

There are messages from Akiti including, “I am the best” or “I am the greatest,” and when I read that out loud to an audience of children, the message automatically connects—especially among minority children. I want them to know that they are the best and greatest and to always believe in themselves as the best and greatest.

Also, I like to promote that the only way to exercise your mind is to constantly read. You should always be reading and expanding your mind. That’s what I tell my son, and I hope to empower other children with that message as well.

For other working moms who seek to get published, what are tips for creating avenues for children of color to learn and grow through reading?

First, do your research. I made sure to look up information on what character I wanted to create. Second, go to the library or book store, look at books in that genre and find out the name of publisher. It’s usually in the first few pages of the book. Reach out to them to pitch your book and project. Third, build an established base of followers and supporters via social media, events or other ways you can show what you represent or seek to put out there. Fourth, get a great illustrator. Find awesome talent who can bring your book to life for children.

Also, send it to people you trust to read it and give you feedback. You need to know your market and what would be attractive to children and parents when trying to publish a book that will create impact.