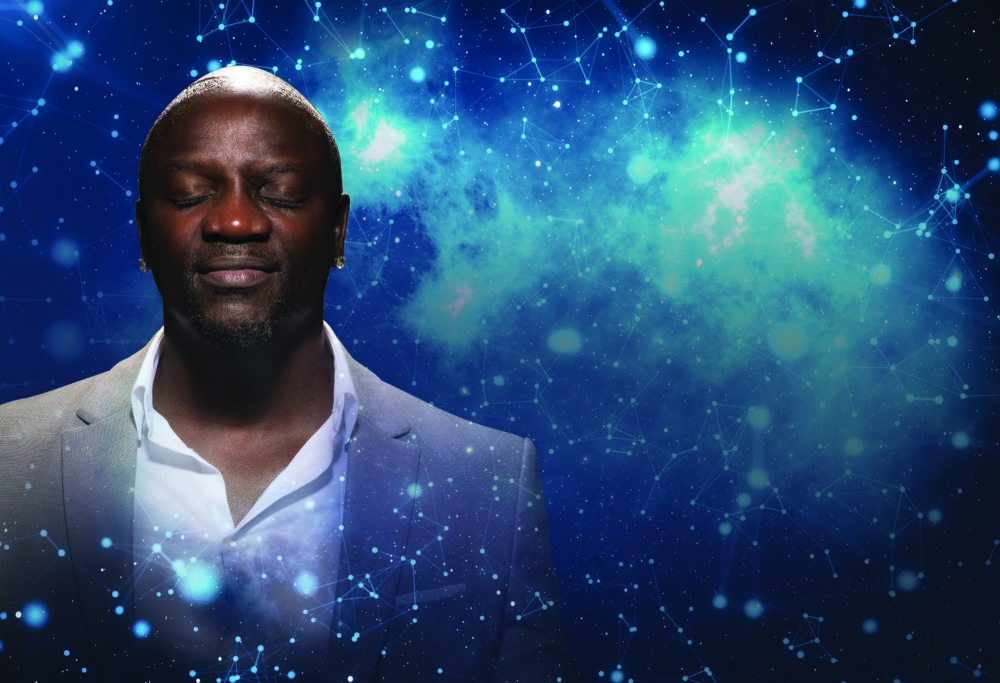 In his breakout hit single “Locked Up,” hip-hop star, producer, and songwriter Akon Thiam sings “Freedom ain’t gettin’ no closer.” Yet, Akon’s philanthropic work and vision for an empowered African diaspora are all about freeing others from economic barriers and creating opportunities.

The Grammy-nominated artist, born in St. Louis, and reared for most of his childhood in Senegal, emerged as a hip-hop star circa the early 2000s. A platinum album and collaborations with megastars, including Eminem, Snoop Dogg, and Gwen Stefani solidified Akon’s place as a music celebrity.

Akon is a force that expands beyond the music industry. He is on a mission to better the world. In fact, he wants to create a real-life Wakanda, using the latest technologies of blockchain and cryptocurrency.

He believes the two emerging technologies could be saviors for the African continent. “When this crypto thing came to light,” he says, “it became something that I felt would be the solution for Africa.”

The artist is so enthused about crypto and blockchain that he developed his own digital currency, the Akoin. What makes this tech so important in Akon’s view is the transparency it offers, which can be used to offset the government corruption that runs rampant in many African countries.

Akon bluntly asserts, “I think the cause of Africa’s underdevelopment is corruption.”

Indeed, the Council of Foreign Relations finds that of the 10 most corrupt countries in the world, six are in sub-Saharan Africa. That corruption robs the continent of $150 billion a year.

Because of the statelessness of blockchain—no one person or authority “owns” the platform—the technology allows for peer-to-peer transactions. For example, digital currency runs on blockchain platforms and allows users to make purchases and invest and sell cryptocurrency with each other without the need of a bank, an investment brokerage, or any other financial authority.

Visionaries also see many other uses for blockchain besides financial transactions. They say blockchain can help create transparent and corruption-free voting systems.

Bloomberg News reported the advantages of using blockchain for voting, citing the technology would make it “more convenient for citizens to vote while abroad, irrespective of the distance and time. It is also a beneficial tool for the election commission to maintain transparency in the electoral process, minimize the cost of conducting elections, streamline the process of counting votes and ensure that all votes are counted.”

Akon gets all that. “I think banking systems can definitely benefit from [blockchain], but the voting system will probably be the No. 1 system for the technology,” he says.

“It doesn’t make sense how Africa has all these resources, this huge population, all this history, and we’re still 10, 20 years behind as far as development,” says Akon. He is convinced that Africa’s development will depend on the transparency that blockchain provides and that it can help thwart the rise of megalomaniacal despots as rulers of African nations.

“The good thing about blockchain is it leaves a footprint,” explains Akon, who is quite comfortable speaking geek. “You can’t do anything without it being open for everyone to see it—it opens the road to transparency.”

Although blockchain platforms provide individual users secure transactions through powerful encryption, these transactions are associated with a public address that can be viewed openly. That’s a very different scenario than with standard financial institutions, where money can be exchanged between a bank and its customer without any public awareness.

The African continent is uniquely poised for a digital currency revolution. Much of Africa relies on the M-Pesa digital mobile banking system. Thirty million Africans use M-Pesa to conduct money transactions as an alternative to often corrupt banking institutions and to combat high inflation.

Experts and analysts say there is already a steady rise and continuing growth in the use of cryptocurrency in African countries. Business and tech journalist Rakesh Sharma told AfricaRenewal Online that cryptocurrency adoption is almost a guarantee in Africa because “with their paradigm of decentralization, cryptocurrencies offer an alternative to disastrous central bank policies.”

Akon also says the emerging technologies are a means for creating channels of investment between African startups and investors all throughout the African diaspora—a chance to generate wealth for black and brown people around the globe in an equitable way.

And he has a plan to use the Akoin and Akoin platform to fuel his version of Wakanda—an Afrofuturistic city just outside Dakar, the capital of Senegal, where he owns 2,000 acres.
“The whole idea with the city is to create a renewable city,” he explains. “Crypto is the money spent in the city; all digital. All renewable energy; no gas, no nothing. And clearly, we’ll create platforms of all of today’s newest technologies embedded within the city itself.”

So how does the Akoin factor into that plan? Akon explains that the Akoin platform—the Akoin Ecosystem—will serve as a sort of entrepreneurial app store, where African entrepreneurs can build companies and offer services that can aid and fund the city.

“Entrepreneurship programs and apps that we add will help stimulate the youth and help give them opportunities and the tools to help build the future for Africa,” he says.

In the meantime, Akoin can be purchased just like any other cryptocurrency—like Bitcoin or Ripple—that is, when it is available. After a somewhat muddled “soft launch” of Akoin in June of this year, Akoin is still not yet available for purchase on digital coin exchanges. However, Akon says that soon the currency will be “on any platform where you can buy a token today.”

If anyone can make a real-life Wakanda, Akon seems the one to do so. He’s showed his dedication to empowering Africa, figuratively and literally, with his Akon Lighting Africa project. Launched in 2014, by Akon, Thione Niang, and entrepreneur Samba Bathily, the project has installed 100,000 solar lamps in over 400 rural communities in 15 different projects to date.
Akon says he is inspired by black leaders—both African and American—from the past who fought for justice.

“They faced physical impact and physical punishment,” he says. “Because of them, I am willing to do whatever it takes to put us in a better place.”