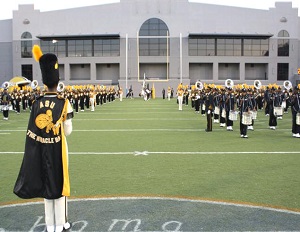 Alabama State University’s Mighty Marching Hornets Marching Band will soon be coming to a television screen near you.

The HBCU marching band has began filming episodes for its upcoming reality show on A&E Network, which will center around the growth and experiences of students in the music program.

“This is a unique and wonderful opportunity to share with the public, through the A&EÂ  Network, our incredible university, and to let the world see how we nurture our ASU band members into becoming good musicians and motivate them to become great students academically,” said Professor James Oliver, band director for the Mighty Marching Hornets.

The name of the show is “Bamma State Style,” and it’s expected to air in January 2015.