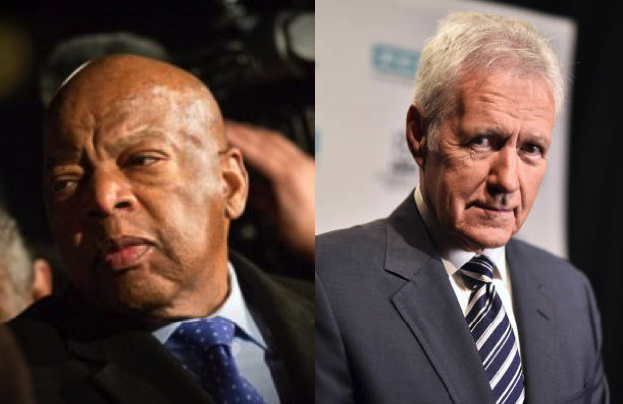 “We’re starting a new year, and let’s see if we can’t both complete the year as pancreatic cancer survivors,” Trebek said when questioned what he would tell Lewis, reports Politico.  Both men are 79 years old.

Lewis, a Democrat, and longtime congressman and civil rights leader, announced recently that he was diagnosed and is undergoing treatment for stage 4 pancreatic cancer.

“It is a challenge and a fight. But I have had challenges before and been fighting all my life,” Lewis told The Atlanta Journal-Constitution. “I am ready for the fight. I will go through the treatment and face the day each day like it is a new day. I will continue to be hopeful and optimistic.”

Despite the diagnosis, Lewis still plans to continue to serve in Congress.  Friends and colleagues have been offering their support to him.

“While I am clear-eyed about the prognosis, doctors have told me that recent medical advances have made this type of cancer treatable in many cases, that treatment options are no longer as debilitating as they once were, and that I have a fighting chance,” Lewis, 79, said in the statement.

In March of 2019, Trebek announced that he had been diagnosed with stage 4 pancreatic cancer.  He has been receiving treatment ever since and still hosts the long-running quiz show.

“It’s humbling to realize there are so many people out there who care enough about you to want to pray for you every day, who want to send you their best wishes,” Trebek said.

I have been in some kind of fight – for freedom, equality, basic human rights – for nearly my entire life. I have never faced a fight quite like the one I have now. https://t.co/XVcbTlsNNv