All Aboard the Obama Train 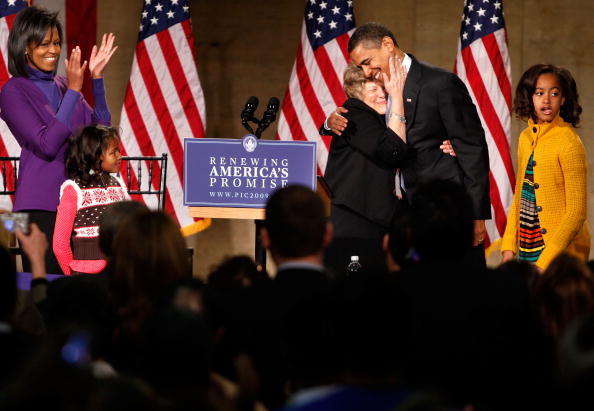 President-elect Barack Obama is embraced by supporter Patricia Stiles after taking the stage with his wife Michelle, and daughter Sasha and Malia before embarking on a Whistle Stop train trip to Washington. (Source: Getty Images)

While clearly focusing on the future, the man who will the 44th president of the U.S. on Tuesday paid tribute to the past, as he echoed the words of the Declaration of Independence, Lincoln and President John F. Kennedy.

“They were willing to put all they were and all they had on the line – their lives, their fortunes, and their sacred honor – for a set of ideals that continue to light the world. That we are equal. That our rights to life, liberty, and the pursuit of happiness come not from our laws, but from our maker. And that a government of, by, and for the people can endure. It was these ideals that led us to declare independence, and craft our constitution, producing documents that were imperfect but had within them, like our nation itself, the capacity to be made more perfect,” he said as he stood in a large waiting room before a half-dozen American flags.”

Obama soaked up the adulation during his address, but from the outset, he told the assembled crowd that the perseverance and idealism displayed by the founding fathers will be needed to fight the current economic conditions.

“We recognize that such enormous challenges will not be solved quickly. There will be false starts and setbacks, frustrations and disappointments,” he said. “And we will be called to show patience even as we act with fierce urgency.”

Obama was traveling from Philadelphia to Wilmington, Del., to pick up Vice President-elect Joe Biden and his family, and then to Baltimore before arriving in Washington after nightfall.

The first family will sure to be celebrated as they make their way along the 137-mile route withas many as 100,000 to be in attendance for his speech at Baltimore’s War Memorial Plaza.Â  Michelle Obama may get extra cheers along alongÂ  the journey as today is her 45th birthday.

We are here to mark the beginning of our journey to Washington. This is fitting because it was here, in this city, that our American journey began. It was here that a group of farmers and lawyers, merchants and soldiers, gathered to declare their independence and lay claim to a destiny that they were being denied.

It was a risky thing, meeting as they did in that summer