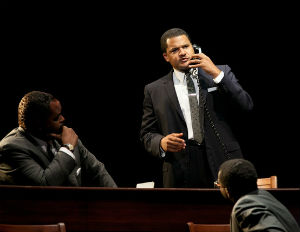 “Acting is work,” said the actor Brandon Dirden between sips of coffee recently. He was talking about what it is like to work with Bryan Cranston, who won three consecutive Emmys for Outstanding Lead Actor in a Drama Series for his role in “Breaking Bad.”

“There’s no mystery in acting. The thing that most people don’t understand is that acting … is work. At the end of the day it’s a lot of blood, sweat and tears. It’s not sexy. It’s work. It’s not magic, it’s like any other job.”

He was wearing a dark suit, a neat white shirt and had that good hair: jet black and slicked away from his face. Clues that his current job is unique were all around him during a recently publicity tour, which that day stopped in a fancy restaurant in the heart of Broadway. He’s in Pulitzer Prize-winner Robert Schenkkan’s “All the Way,” a muscular, three-hour play set in 1964 which dramatically explores the nation-defining challenges of Lyndon Baines Johnson’s presidency. Mr. Cranston leads a company of 20, unheard of in these lean economic times. And then there is the matter of Mr. Dirden’s role: He plays Dr. Martin Luther King unlike we have seen him on stage before. It’s work that is about as good as it gets.

“The wonderful thing about Bryan is that he understands that, so working with Bryan has been like working with any other great actor in New York or L.A. You’re looking across that stage at Bryan, he’s looking back at you and we’re figuring this thing out together. And that’s all acting is. So working with him has been pleasantly routine,” said Mr. Dirden. “He’d done as much research for his role as anyone else had in the play. He did the work … up on that stage he’s L.B.J. It’s none of what you saw on Breaking Bad.”

He says his interpretation of Dr. King isn’t emotionally rooted in his skill as a speechmaker, but as a politician. Mr. Dirden says his arrival there was a byproduct of reading Dr. King’s memoir “Why We Can’t Wait,” as well as Taylor Branch’s King-era trilogy “Parting the Water,” “Pillar of Fire” and “At Canaan’s Edge.” Engaging in heavy reading is a theme that runs through the cast’s preparation: Mr. Cranston read Johnson biographer Robert Caro’s “Master of the Senate,” and Doris Kearns Goodwin’s “Lyndon Johnson and the American Dream.”

“Everything that he’s talking about in the ‘I Have a Dream’ speech, Dr. King knew that it had to applied politically in order for those hopes and dreams to be achieved. Politics was the route. And so that’s the essence and the spirit that I had to hook in to.”

“[The play] is saying that this is what America hath wrought … 1964 is one of the most combustible periods in our nation’s history and whoever we are is a product of that 12-month period.”

*Check out this video preview*: