Amazon CEO's Net Worth Rises $1.4B Thanks To Smartphone Rumors 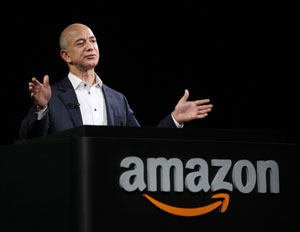 According to Forbes, Amazon’s special announcement on Wednesday about its not-so-secret smartphone gave the stock a boost of more than 5.4%, helping it close at $323.59 on Thursday.

The rise boosted Bezos’ worth by $1.4 billion, making him worth $29.9 billion. That makes him the 20th richest man in the world.

Amazon’s rumored smartphone announcement is being teased on its site, which invites anyone to sign up and attend the event in Seattle.

The smartphone is supposedly outfitted with various cameras that can track the user’s head and face, and create a 3D effect on the display. Amazon posted a promotional video of the device, although it’s held off-screen, with people using it and remarking on it.