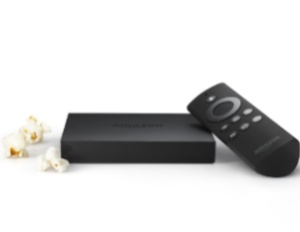 Amazon's set-top box is quicker than the competition, and has an optional gaming controller.

Today, Amazon announced its very own television set-top device, the Fire TV. Rumors of the streaming box have been around for well over a year, but it looks like Amazon figured out a way to differentiate itself from the competition brought by Apple, Google, and Roku, mainly by offering much more for the same price, even if it undercuts itself. Amazon’s loss-leading strategy can be seen in all its hardware devices. It uses e-book sales to offset the slim margins of the Kindle devices, and does the same with content for Fire tablets.

On the Fire TV, Amazon offers purchase options from third-party services like Hulu Plus, even if the price is cheaper than its own. With its pricing decision, Amazon’s touting a more open ecosystem, and proving it with its large selection of media apps ranging from Vevo to Hulu Plus to Plex. You can stream music from your Amazon MP3 library or use the variety of music streaming apps like Pandora and iHeartRadio, though Spotify and Beats Music are notably absent from its selection, at least for now.

The new Fire TV is running on some souped up hardware compared to competition from Apple and Roku. It has a quad-core processor and 2GB of RAM, making operation pretty snappy compared to the underpowered competition. And sure, while the Fire TV doesn’t have HBO Go, it does do one thing some of its competitors can’t: play games. It isn’t just sitting on that extra processing power; with what’s essentially a casual console, Amazon’s moving into the gaming scene with its own development company, Amazon Game Studios. Its first launch title made exclusively for the fire TV is Sev Zero, a third person shooter.

The Roku 3 does play motion-controlled games, but only Amazon has a set-top box with a dedicated gaming controller, geared less toward hardcore console gamers and more to casual mobile gamers who want to play on their TV. Launch titles include The Walking Dead and Minecraft: Pocket Edition, among others. You can get Sev Zero for free when you buy Amazon’s Fire TV game controller, priced at $39.99. There are already over 100 Fire TV-optimized games at launch, with more promised in the coming year.