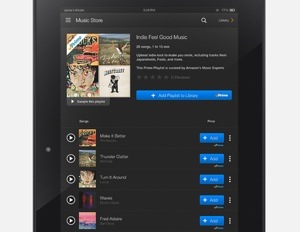 Amazon's Prime Music service will be ad-free and bundled with your Amazon Prime subscription.

Amazon Prime is now even more valuable if you’re a music lover.

On Thursday, Amazon released Amazon Prime Music, its own streaming service designed to take on Spotify, Beats, and others. And while it may not get current Spotify users to switch, it could keep current Prime customers inside Amazon’s walled garden of content.

Prime Music will, naturally, be free for all Amazon Prime members. A Prime subscription costs $99 per year, an increase that went into place a few months ago.

In a press release, Amazon’s CEO Jeff Bezos said Prime Music “… is the latest great addition for Prime members and we think they’re going to love it.â€ The service currently offers around one million songs, which pales in comparison to Spotify’s gargantuan 20 million count.

Of course, it’s practically impossible to listen to 20 million songs, let alone one million, but Amazon’s betting on Prime users that don’t want to pay exclusively for ad-free music, and instead want it bundled with Amazon’s slew of other services.

Compared to Apple, Amazon’s subscription service offers more bang for your buck. Through Prime you can rent books in the Kindle Owners’ Lending Library (provided you own a Kindle of any kind), check out certain movies instantly, and now stream music for free. The options are certainly not as massive as they would be if you paid for each piece of content on its own, but the company is offering media that appeals to the widest audience.

You won’t need a Kindle device to use Prime Music,

The news comes days before Amazon is set to unveil its widely rumored smartphone that potentially uses multiple cameras to create a 3D display.