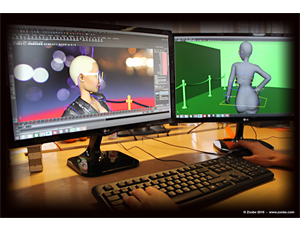 Pop culture’s Amber Rose is giving her fans–or, as she refers to them, her “Rosebuds” – her image in three-dimension.

She has teamed up with Zoobe, a character voice-messaging app that works for both iOS and Android.

[Related: 5 Ways to Tell if That Financial App is Really Safe]

With her 3D character and the Zoobe app, fans can express themselves and communicate as Amber Rose in the digital world.

“We are extremely proud to add Amber as our first Zoobe Star to our character cast. She has an enormous social media presence, and is constantly challenging the ways in which celebrities remain in touch with their fans,” notes Norbert Richard Meinike, chief marketing officer at Zoobe. “Much like all of our characters, Amber does not shy away from having strong opinions, and we love colorful personalities! At the moment, there isn’t anyone else out there who we see as a more perfect Zoobe Star.”

“Now is your chance to have ME come to life right in front of your eyes!” says Amber Rose.

“My 3D character is stepping into your life through your mobile device, all thanks to a new app called Zoobe.”

With Zoobe, users can create, share and publish animated video messages with their own voices and select from over 100 characters, Amber Rose is the latest to be added.

The app has an average review rating of 4.2 on Google Play and 5 stars in the App Store.

Celebrities such as Amber Rose are hoping to tap into the phenomenal success of pop icon Kim Kardashian’s app ventures. Her Kim Kardashian: Hollywood app, is a mega hit for app developer, Glu Mobile Inc. up.

“It might be our biggest game of the year,” Chief Executive Officer Niccolo de Masi said in an interview with Bloomberg. “We’re not surprised. Kim is a one-of-a-kind talent with an incredibly precise fit to the game engine that we tailored but already had in the company.”

While the Kardashian app is free to play and download, the in-app purchases (some of which can go as high as $99) have added millions of dollars to Kardashian’s already ample coffers.

Last year her Kimoji app–a set of customized emoji Â that she launched–reportedly “brokeâ€ the App Store due to traffic congestion from the thousands of concurrent downloads.

At the time, TMZ reported that the app was getting up to “9,000 downloads per millisecond,” which sounded like a completely fictional exaggeration, until Apple seemingly confirmed it as such, according to Tech Insider, reports Vanity Fair.