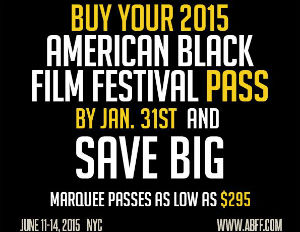 Saving money is the savvy spender’s goal, which is why Black Enterprise and Film Life are offering early bird rates to attend the 2015 American Black Film Festival (ABFF). Taking place June 11-June 14 at the New York Hilton Midtown, the 4-day event is packed full with movie premieres, screenings, master classes, panels, performances, and networking opportunities for those who work or aspire to be a part of the film and TV industry. 2015 marks a celebration of the American Black Film Festival’s 19th year providing an outlet of support for blacks in the movie and television business.

The early bird rates, which expire January 31, apply to all three passes offered to attend this year’s festival — The Marquee, Club, and Concierge. For the early bird price of $295, the Marquee pass offers entry into the opening night film, afterparty, each of the talent competitions; “Best of the ABFFâ€ awards ceremony, talks, panels, celebrity conversations, screenings, seminars, industry expo, and even the hospitality lounge.

Taking a step up, The Club pass offered through January for $495 brings all of the Marquee perks while adding express registration and entry to events. This comes along with access to the premiere screening of the festival’s opening night film.

While the coveted Concierge pass, currently $1195, typically attracts those who not only want all that the Marquee and Club passes offer, but also VIP only events, the opening night film’s red carpet reception, and entry to the private dinner hosted by ABFF founder, Jeff Friday. Adding one master class, a post-awards reception, priority entry, and premium reserved seats, a fatter swag bag tops off the must haves for Concierge Pass VIPs.

Go to ABFF.com to register.