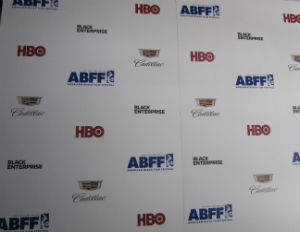 Black Enterprise is media sponsor at ABFF in NYC

Announced via press release earlier today, the American Black Film Festival (ABFF) has released their highly anticipated roster of films and it was well worth the wait. With more than 30 documentaries, web originals, short films and narrative features, there’s something for everyone and no shortage of quality films for attendees.

The ABFF is a four-day-long event that begins on June 11 and ends June 14. The festival and its creators are dedicated to showcasing quality film and television content by and about people of African descent, and are committed to the belief that black artists and content creators deserve the same opportunities as their mainstream counterparts. Taking place at AMC Empire 25 movie theater in Times Square, audiences will be treated to a selection of competing films that showcase an impressively expansive scope and diversity, and explore such topics as love, race, politics, relationships, crime and fame. In a statement about the festival, ABFF CEO and founder Jeff Friday said, “This year’s films highlight the importance of giving a voice to diverse storytellers. From a documentary on American mountaineers to a narrative about black models, our roster of films reflects the breadth of the black experience. It is also always wonderful to see ABFF alum return to showcase their latest projects. We encourage everyone to come out and support the work of these talented filmmakersâ€.

The festival kicks off with one of the most anticipated films of the year, the comedy-drama Dope,Â Â which features names like ZoÃ« Kravitz, A$AP Rocky, and Chanel Iman on screen, as well as big names like Sean “P. Diddy” Combs, Forest Whitaker, and Pharrell Williams behind the scenes.

As the festival rolls on, attendees are encouraged to check out the Season 4 premiere of ABFF Independent, a showcase of popular and award-winning films from the American Black Film Festival. Hosted by Hip-Hop artist, record producer and actor David Banner, this year will feature a showing of the 1991 cult classic Boyz N The Hood, with a Q&A session with Â the director of the film, John Singleton.

For a complete schedule of all the fun events and fresh films, check out http://www.abff.com/event-schedule/.

ABFF Founder Jeff Friday conceived the idea for the festival in 1997 as a vehicle to promote diversity in the motion picture industry. Produced by Film Life Inc. and BLACK ENTERPRISE, today the festival is widely recognized for showcasing established and new black talent, both in front of and behind the camera, and is regarded as one of the leading film festivals in the world.

Don’t miss any last-minute updates or surprises. Â Be sure to follow ABFF on social media: