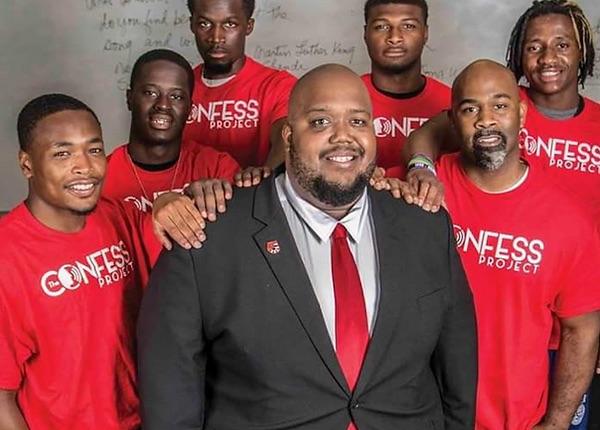 (Photo courtesy of The Confess Project)

The placement of Black-owned barbershops has been so significant in Black history that it continues to serve as a “Black man’s sanctuary”—a catalyst for individuals to find not only confidence in themselves but in their communities.

Lorenzo Lewis is the founder of The Confess Project, America’s First Mental Health Barbershop Movement, which highlights the role barbers may play as mental health advocates, suicide prevention, and interpersonal violence gatekeepers. Founded in Arkansas, the nonprofit began in 2016 after Lewis discovered the need for more Black mental health advocates when he suffered from an undiagnosed mental illness and was sent to jail, according to FOX16. His experience drives his commitment to building a culture of mental health for boys, men of color, and their families.

According to Mental Health America, Arkansas is ranked 47 out of the 50 states and Washington, D.C. for providing access to mental health services, and ranks 44th for poor access to services. In addition, African Americans account for 5.3% of the psychology workforce. While there is still a critical shortage of mental health workers of color across the United States, statistics indicate that only 1 in 3 African Americans who need mental health care actually receive it.

Now a leading voice in the mental health advocacy field, The Confess Project aims to bridge this gap through a certification program that equips Black barbers, K-12 educators, and mental health advocates across the country through capacity building, advocacy, organizing, and movement building.

Envisioning a world without barriers to stigma and shame, The Confess Project continues to work with city governments, universities, and organizations to highlight how mental health intersects with police brutality, LGBT issues, gender inequality, and more.

Since its establishment in 2016, The Confess Project has expanded its reach beyond Arkansas, having trained more than 1,000 barbers in over 40 cities across multiple states, according to FOX16. It was recognized by the Governor of Arkansas, and in 2019, the American Psychiatric Association Foundation honored it with the “Pioneer for Advancing Minority Mental Health” award.