An Immersive Experience for HBCU Scholars at Apple 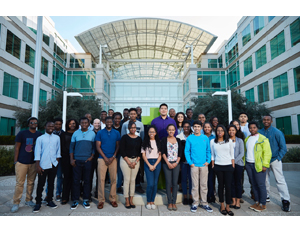 The Immersion Experience program is the result of a partnership between Apple and the Thurgood Marshall College Fund to prepares these students for upcoming internships with Apple.

“We’ve had a wonderful opportunity so far, and we got to speak with executives and get a tour of the campus. We also met with Ambassador Andrew Young yesterday–it’s been a really great time,â€ said Haley Hall, a junior at Howard University, and marketing major.

Garston Seneza, a junior at Philander Smith College and a computer science and mathematics major also said the students were given a tour around the Apple campus and also met with mentors.

Denise Young-Smith, vice president for worldwide human resources, Apple, spoke with Black Enterprise on the significance of the program.

“Historically black colleges and universities are a treasure and a treasure talent pool that for whatever reasons; proximity, culture…has been somewhat less than minimally tapped by the tech industry,â€ said Young-Smith.

“Being an HBCU graduate myself, I understand this depth of talent that many companies, unfortunately, don’t get to see…given that most HBCUs are geographically located in the southeastern [part of the U.S.],â€ she said.

Young-Smith was familiar with the Thurgood Marshall College Fund saying the organization has “a good reputationâ€ and “solid board leadership.â€ With TMCF, Apple wanted to understand why great students coming from the several HBCU engineering schools, such as Tuskegee and Howard, were not getting exposure and access to Silicon Valley.

“We decided to embark on a long-term partnership,â€ says Young-Smith.â€ We agreed to an apprenticeship that encompassed many facets that would not help just Apple, but helps the students and some of the really focused faculty members that we met, and helps the tech industry as a whole.â€

“I look at this program as a startup; it’s inaugural not just for Apple but for us,â€ says Lilly. He says the partnership was ideal because “we pride ourselves in being nimble and quickâ€ in alignment with “the culture of Apple.â€

The decision was made to widen the pool of potential interns to include other majors besides computer science. The idea is to show as many students as possible that dreams of working for a company such as Apple are achievable.